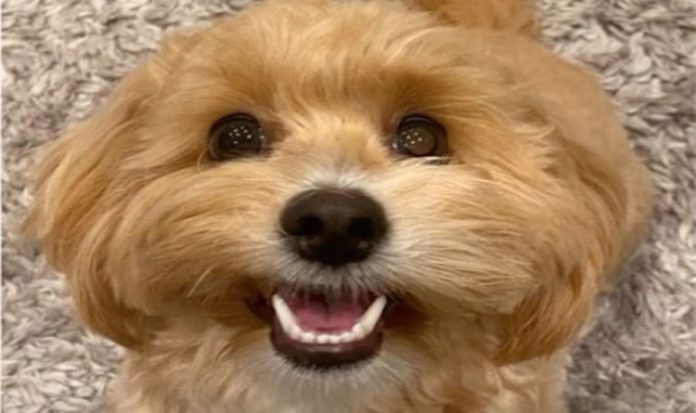 Dog theft has surged during lockdown due to an increased demand for four-legged companions and increasing monetary value. Cruel thieves are taking advantage, stealing and selling dogs for their own financial gain. Stolen and Missing Pets Alliance report a 170 percent increase in dog theft.

Melina Georgiou recently had Nala, her family Maltipoo, stolen. She appeared on Sky News this morning with Debbie Matthews, CEO of Stolen and Missing Pets Alliance.

Ms Georgiou said: “Nala was in a dog walker’s van who we only use every couple of weeks when we are all in meetings and we want her to be able to go out and socialise with other dogs.

“As the dog walker was dropping off one of the dogs who had also gone for a walk, someone jumped in the back of the van and sped off with Nala and two other dogs.

Nala was stolen when thieves sped off in a dog walker’s van. (Image: Sky News)

“That night, the van was found and one of the dogs was found inside, but Nala and the other dog were gone.

“The next day, the other dog was found in Kent, which is very far from where we are. But Nala is still missing.”

Melina said: “We, eat, breathe and sleep this situation. I have had to take leave from work, it is like a full time job just trying to get the word out there for Nala.

“It has been rollercoasters of just ups and downs because we have had support from thousands of people, people that I don’t even know up and down the country, which makes you feel motivated that we are going to hopefully find her.

“But then you get moments of grief because I don’t know where my dog is and who has got her and what she is going through. It is awful not knowing where she is or when she is going to come home.

“She is the apple of our eye. She is so much company for my aunty who lives alone, she is a best friend for me. It would mean the world to get her back where she belongs and where she is happy.

Melina has begged that Nala be returned. (Image: Sky News)

“She is just a baby, she is probably terrified, and we just want her back.”

Ms Georgious begged: “If anybody has just bought a dog who looks like Nala and isn’t quite a puppy, make sure you are going to the vet and getting them scanned because their microchip could show that it is Nala.

“There is a reward if you just give her back. There will be no questions asked, we just want her back.

“To you, you see money, but to us, she is like our little baby. I can’t imagine what it is going to be like not having her.”

Debbie Matthews, from Stolen and Missing Pets Alliance, said: “Over lockdown we saw more people wanting to have puppies and dogs. Kennels were being broken in, 17 dogs taken, 14 dogs taken, it has been horrendous.

“For the owners, it is just devastating, it is a life-changing event and something you do not get over.”

Ms Matthews continued: “The crux of the problem is that dog theft is seen as ‘other theft’, there isn’t a type of dog theft crime.

“You can see the emotion that is attached to these dogs. They are family members, they are irreplaceable, they are priceless, yet they are treated like a mobile phone in law.

“It is absolutely atrocious there are no deterrents in place for dog thieves. It is seen as a low-risk crime, if they do get caught they will be fined £250, so it is worth them taking the risk.

“The law needs to change to protect pet owners and their dogs.”

To prevent your dog from being stolen, Ms Matthews said: “The number one place dogs are stolen from is their garden or their home. Check your home security, check your gardens, never ever leave your dog unattended anywhere. Walk with the dog in places where there are other dog walkers in sight.”