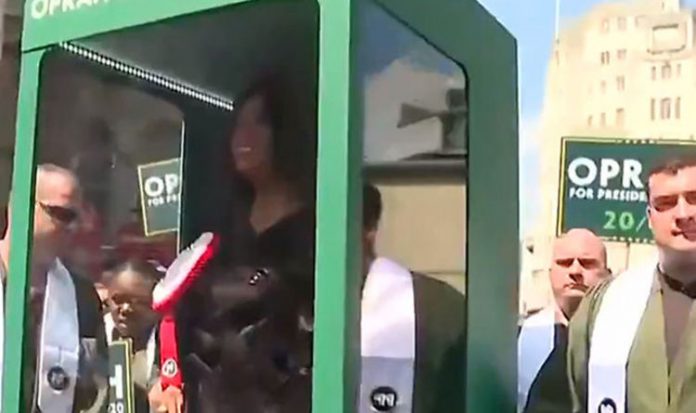 Dozens of activists dressed in green and waving placards ‘Oprah for President’ were spotted taking part in the anti-Trump demonstration.

They were accompanied by a gospel choir and a wax work of American TV star Ms Winfrey, who has been tipped to run for the White House.

Mr Trump, who is currently taking part in a four-day trip to the UK, has repeatedly clashed with the 64-year-old talk show host and actress.

Earlier this year he branded her “insecure” and “biased” after she questioned whether he was fit to be president.

He tweeted: “Just watched a very insecure Oprah Winfrey, who at one point I knew very well, interview a panel of people on 60 Minutes.

“The questions were biased and slanted, the facts incorrect. Hope Oprah runs so she can be exposed and defeated just like all of the others!

Earlier this year, Winfrey denied she was tempted to run for president in 2020.

She said in February: “I am definitely not running for president.

“I am the kind of person who tries to listen to signs. I think, well am I supposed to run the country? I don’t think so.”