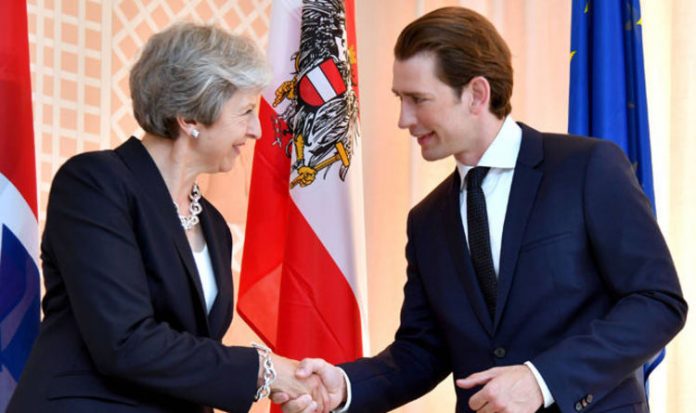 She visited Austria for talks with her counterpart there, and also the Czech PM, as part of a UK government cross-Europe charm offensive this week by ministers.

He told the BBC: “The fact that we are maybe critical of some aspects of EU policies does not mean we wouldn’t stand behind a very strong position on the integrity of the single market.”

Czech differences from Brussels on some policy areas did not allow “a more open position for trying to find loopholes in the EU position” on Brexit, he warned the UK.

He also backed Mr Barnier’s rejection of Mrs May’s cornerstone customs plan to have Britain collect import tariffs on the EU’s behalf, on goods destined for the Continent.

UK negotiators hope to win over Mr Barnier on the customs plan but EU sources said that it was “wishful thinking”.

Austria’s 31-year-old rightwing Chancellor Sebastian Kurz told his guest in Salzburg: “From our point of view it is important to avoid a hard Brexit.”

But UK observers were unclear whether by this he meant a “no-deal” exit.

Mrs May stressed yesterday to Mr Kurz and Czech PM Andrej Babis, that her latest blueprint will maintain frictionless cross-Channel trade and that it was in all sides’ interests to reach a good deal.

Meanwhile, the European Parliament delivered its own stark warning to Mrs May.

Its Brexit Steering Group signalled the Parliament would not approve the Withdrawal Agreement unless there was a “credible, genuine and operational” backstop proposal to prevent a hard border between Northern Ireland and Ireland if a permanent solution cannot be found in time.