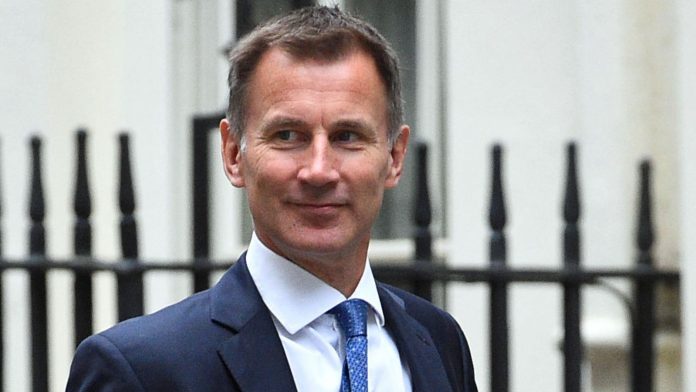 The foreign secretary warned the EU not to “mistake British politeness for weakness” as he backed Theresa May’s refusal to change her Brexit approach.

Reiterating the prime minister’s demand that Brussels engage more seriously with the UK’s proposals, Jeremy Hunt urged EU leaders to “step back from the abyss, to sit down and talk to us about how we can make these sensible, concrete proposals actually work”.

“If the EU’s view is that just by saying no to every proposal made by the UK we will eventually capitulate and end up with either a Norway option or indeed staying in the EU – if that is their view then they’ve profoundly misjudged the British people”, he told BBC Radio 4.

While acknowledging a “no-deal” scenario would be “bumpy” and “difficult” for the UK, Mr Hunt insisted there would be “disruption” on both sides of the Channel – suggesting up to a million jobs could be lost across the EU.

His comments come as German newspaper Der Spiegel reported that Angela Merkel’s government has assessed that the impact of a no-deal Brexit on the German labour market would be “relatively small”.

In a statement from Downing Street yesterday, the prime minister declared Brexit negotiations had reached an “impasse” and went on to accuse EU leaders of failing to treat the UK with “respect”.

During the meeting, EU Council President Donald Tusk said the prime minister’s Chequers proposals – which would retain common European rules for goods, but not services – would “not work” as a future economic relationship between the UK and the EU.

In response to Mrs May’s comments, Mr Tusk attempted to smooth over the row.

He insisted he was a “true admirer” of the prime minister and that her proposals were a “step in the right direction”.

But he also suggested the decision to make clear EU countries remain unified behind their chief negotiator Michele Barnier was the result of what he described as the “surprisingly tough and uncompromising” approach the UK had put forward in Salzburg.

Mrs May received praise for her defiant Downing Street statement from across her party, including Brexiteer Jacob Rees Mogg, who welcomed her “steely resolve” in the face of “EU bullies”

However, her refusal to drop the Chequers proposals remains a point of serious contention.

Newspaper reports suggest the prime minister could come under pressure during a meeting of the cabinet on Monday.

Citing a Westminster source, The Daily Telegraph claimed the meeting would represent a “crunch point” in the Brexit negotiations, when ministers would “have to look again and reassess like Boris Johnson and David Davis did“.

Work and Pensions Secretary Esther McVey and International Development Secretary Penny Mordaunt are among those who could resign if no backup plan is agreed to, the newspaper reported.

Mr Davis – who quit his cabinet post over Chequers and is promising to publish his own plan for leaving despite offering little so far – is due to appear today at a Leave Means Leave rally in Bolton, Greater Manchester.

Former UKIP leader Nigel Farage will also appear at the event. Both men set to speak.

Labour leader Jeremy Corbyn and his shadow Brexit secretary Sir Keir Starmer have already stuck the knife in, with Mr Corbyn accusing the prime minister of being “incapable of delivering a good Brexit deal”.

The pound slumped by almost two cents against the dollar after the address, which Mrs May used to repeat her belief that “no-deal is better than a bad deal”.

She ruled out a Norway-style relationship as it would keep the UK as a rule-taker from Brussels, and quashed talk of a basic trade deal as it would leave Northern Ireland “permanently separated economically from the rest of the UK by a border down the Irish Sea”.

Her address came little more than a week before what promises to be a fractious Conservative conference, amid deep splits within the party over Brexit.