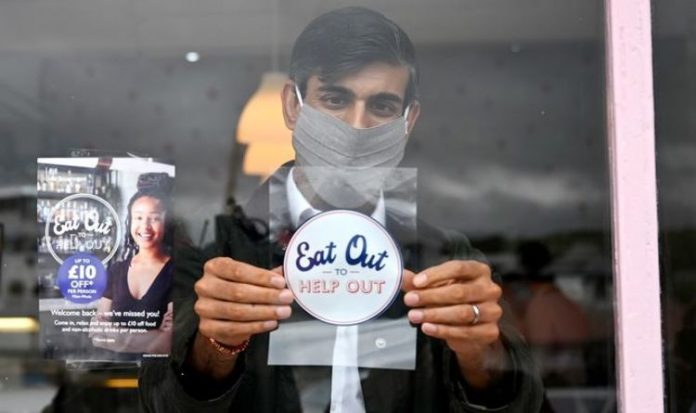 The Eat Out to Help Out scheme was one of the flagship economic policies of the short-lived summer respite from coronavirus in the UK. Now, Chancellor Rishi Sunak is reportedly considering revamping the scheme to coincide with the forthcoming relaxation on coronavirus restrictions.

Launched at the end of the first lockdown, the Eat Out to Help Out scheme took place every Monday to Wednesday throughout August 2020.

The scheme gave a 50 percent discount on food or non-alcoholic drinks to eat or drink in, up to a maximum of £10 discount per diner, at participating restaurants.

All you had to do was turn up, eat in, and pay for the remainder of the bill.

At the time, the Eat Out to Help Out was a huge success, with more than 64 million meals claimed by diners over the period.

Mr Sunak said last year: “This scheme has reminded us how much we love to dine out, and in doing so, how this is helping to protect the jobs of nearly 2 million people who work in hospitality.”

While the deal gave a huge boost to the hospitality sector, the darker side of the scheme began to emerge as the remainder of 2020 saw the return of coronavirus.

Research conducted by the University of Warwick found the scheme was closely linked to an increase in cases.

The study said: “The empirical estimates suggest that the scheme may be responsible for around eight to 17 percent of all new detected Covid-19 clusters (at least two new infections in the same area) emerging during August and into early September in the UK.”

Mr Sunak will be rolling out his plan for economic recovery from the COVID-19 crisis, in which the UK has one of the worst death tolls in the world.

However as yet nothing has been confirmed about what support the Chancellor could be about to roll out.

Reaction on social media to the rumours has been largely negative, with many citing the fact that the scheme is thought to have contributed significantly to the rising number of cases at the tail-end of 2020.

In response to the news, one user said: “Just throw the whole country away at this point we’re never leaving this hell.”

Another, feeling similar sentiments, said: “Rishi Sunak doesn’t care about the health and well-being of the general public and only cares about big businesses making more money.

“Let’s increase the number of covid cases yet again, but at least some guy who owns a couple hundred pubs or restaurants is getting richer I guess.”

One suggested a different policy, saying: “How about instead of ‘eat out to help out’, we get ‘take out to help out’; the same 50 percent discount, covered by the government, but for DELIVERY. That way we won’t have gatherings.”

A parody account for the Prime Minister wrote on Twitter: “We have learnt from the mistakes of the last time we did Eat Out To Help Out.

“We want this one to more accurately reflect what it does, so we are calling it ‘Eat Scran To Kill Gran’.”