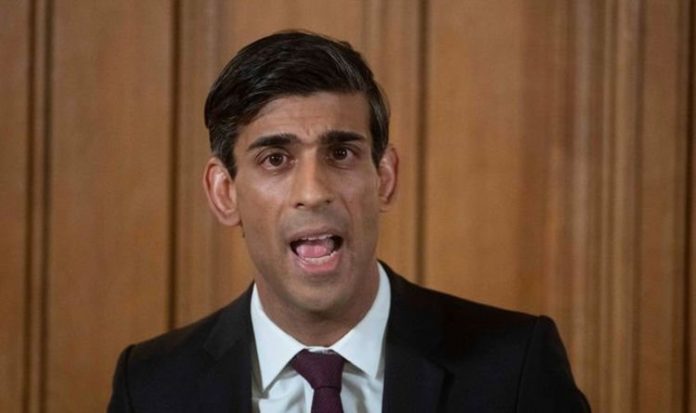 The UK has entered a recession after a 20.4 percent contraction between April and June, as the coronavirus outbreak took its devastating grip. The nation’s slump is also one of the biggest among advanced economies, according to preliminary estimates. Chancellor Rishi Sunak warned earlier this month that the recession would represent a deeply challenging time for the country. He said: “I’ve said before that hard times were ahead, and today’s figures confirm that hard times are here.

“I can assure people that nobody will be left without hope or opportunity.”

Mr Sunak and Prime Minister Boris Johnson are considering their options as they contemplate policies aimed at kick-starting the British economy.

The Chancellor has been praised for his ‘eat out to help out’ policy, as well as the Government’s intervention via the furlough scheme.

However Alan Lockey, Head of Future Work Centre at the Royal Society for the encouragement of Arts, Manufactures and Commerce (RSA), has warned that these measures must be adapted to avoid the economy’s recovery only being “half done”.

Mr Lockey said: “For while the scheme has undoubtedly saved countless jobs so far, if it fails to nurture the economy through to a softer landing, with manageable levels of unemployment, searching questions will be asked abouts its value.”

He highlighted that many firms and businesses in the UK could face bankruptcy in the future, and this is when devastating impacts on employment could occur.

However, the further from lockdown the UK moves, the more pivotal questions will be over employment and therefore the more scrutiny the Government will come under.

He continues in his column for CapX: “For example, RSA analysis of ONS survey data shows that 60 percent of furloughed workers in the ‘accommodation and food services’ sector – hospitality and tourism – have now returned to work, a much higher percentage than in sectors like the arts (29 percent) or administration (28 percent).

“Then there is the small matter of local lockdowns – as it stands, the safety net which supported the country through the spring will not be available to towns and cities shut down beyond October.”

Mr Lockey highlights the need for the Chancellor to adapt his interventions soon if the UK is to fully recover from the crisis.