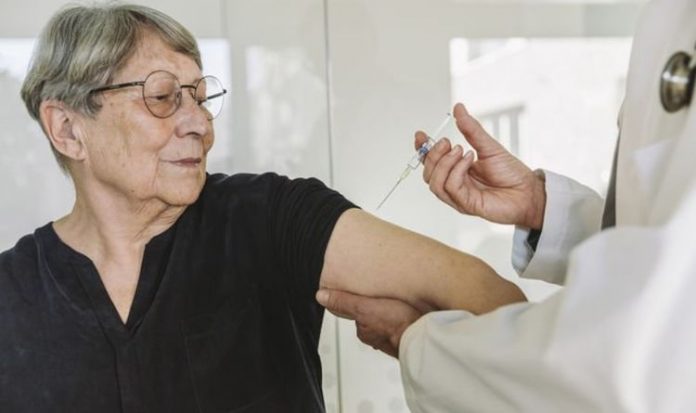 He also said the UK is poised for the “most important vaccination programme we’ve done for decades”. Speaking at a Downing Street news conference Prof Van Tam outlined how the regular development and approval phase for a vaccine had been accelerated due to the pandemic. But he stressed that standards are “no lower” despite the need for rapid results. US pharmaceutical giant Pfizer and its vaccine partner BioNTech this week released initial results that suggested their jab was 90 per cent effective at protecting people from COVID-19.

Asked if he would be prepared to be among the first people to be vaccinated, Prof Van-Tam said: “If I could, rightly and morally, be at the very front of the queue then I would do so.

“Because I absolutely trust the judgement of the MHRA on safety and efficacy.

“But that clearly isn’t right – we have to target most highest risk individuals in society and that is how it should be.

“If I could be at the front of the queue, then I would be.

“But let me say to you this, I think the ‘mum test’ is very important here.

Care homes and NHS staff are set to be prioritised for vaccination (Image: Getty )

“My mum is 78, she’ll be 79 shortly, and I’ve already said to her ‘mum, make sure when you’re called you’re ready, be ready to take this up, this is really important for you because of your age’.”

Care homes, NHS and social care staff, and then elderly people are set to be prioritised for vaccination.

And Prof Van-Tam said that people should not be able to skip the queue by paying privately for a vaccine.

“One of the things I like about the NHS is that it’s there for everybody, irrespective of their level of wealth or who they are in society,” he said.

“That’s a really important principle to me, personally.”

Prof Van-Tam added that deciding such an issue would be “a ministerial decision” but added: “I am giving you my views as a clinician that I think these vaccines need to be prioritised to those who need them, not those who can afford to pay for them privately.”

He admitted that the roll-out of a coronavirus vaccine would be a “mammoth challenge” for the NHS, but said he had been reassured about questions over refrigeration capacity, transport systems and the supply of needles and syringes.

Prof Van-Tam also offered to deliver vaccines himself in his evenings and weekends.

But he was unable to say whether lives would be back to normal by Easter due to the development of a vaccine.

Retired doctors and medical students will be drafted in to help dispense vaccine (Image: Getty)

“We don’t yet know if this vaccine is going to prevent transmission as well as preventing illness, and from that perspective it would be wrong of me to give you a sense that whoever told you that we’d be completely back to normal for Easter is right,” the deputy chief medical officer said.

Professor Wei Shen Lim, chair of the Joint Committee on Vaccination and Immunisation, said the second phase of the vaccination programme could prioritise those who might suffer lasting effects of coronavirus, or who transmit the disease.

“In phase two of the programme it’s likely that we’ll prioritise individuals who may suffer because of the need for hospitalisation because of COVID or perhaps because of long COVID,” he said.

“The reason it’s not been decided is because we need to also balance the possible prioritisation of individuals who are transmitting COVID instead.”

A priority list of which Brits should get a vaccine first was drawn up earlier this year by the influential Joint Committee on Vaccination and Immunisation (JCVI) and is now being used as the blueprint for the rollout.

Care home residents and their carers, of which there are thought to be about 1.1million across Britain, are first on the priority list and are expected to be inoculated by the end of the year.

After care homes, NHS staff and everyone over the age of 80 will be second in line soon after. They too could receive the jab before New Year if the distribution plans go to plan.

READ  UK on the cusp of a transport revolution, as self-driving vehicles set to be worth nearly £42 billion by 2035

Those over 75 will be next in the queue, followed by over-70s, over-65s and high-risk adults under 65 with diseases such as cancer.

Prof Van Tam outlined how approval phase for a vaccine has been accelerated due to the pandemic (Image: Getty )

They will be followed by moderate risk adults under 65 – including diabetics and asthmatics.

Over-60s will be next, with over-55s and over-50s the final priority groups. It is hoped every vulnerable Brit will be protected by Easter, which has raised hopes of returning to normality by spring.

The general population will be last to get their hands on a jab and the JCVI says they will be prioritised based on age or underlying conditions.

Retired doctors and medical students will be drafted in to help dispense vaccines from a thousand GP surgeries around the country amid fears there are not enough staff to carry out the mammoth operation. The army will also be used to help transport the vaccines between labs and clinics.