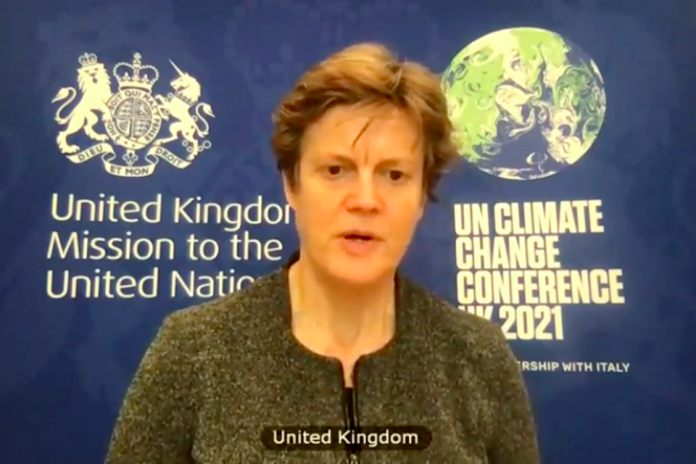 Thanks to Special Envoy Pedersen for his briefing today and for his ongoing efforts to facilitate a sustainable resolution to the conflict through the full implementation of resolution 2254. You have the UK’s full support, Special Envoy.

We take note of the meeting of the Constitutional Committee. Any UN-facilitated meeting is an important opportunity for dialogue and building trust between the parties. However, almost five years after the adoption of resolution 2254 and after four meetings of the Committee, it is past time to start addressing the substance and the drafting of a new constitution. We urge the parties to engage constructively on substantive issues during the next meeting in January.

For without a new constitution, free and fair elections involving all Syrians, including members of the diaspora, cannot take place as envisaged in Resolution 2254. Elections that do not meet these requirements would deny millions of Syrians the opportunity to take part in deciding the future of Syria and to share in ownership in the political process as endorsed by this Council.

Beyond the Constitutional Committee, parallel progress needs to be made on other aspects of resolution 2254. We welcome the Special Envoy’s engagement with Syrian women and civil society. Ceasefires in the north-west and north-east have averted the devastating levels of violence that we saw this time last year. But violence and hostilities continue, causing the needless deaths of civilians and others, including Turkish soldiers. It is the responsibility of all parties to ensure ceasefires are observed. Counter-terrorism efforts should be coordinated and targeted, and pursued in compliance with international law as set out in paragraph 13 of resolution 2254. As the Special Envoy emphasised, any return of refugees to Syria should also be in accordance with international law and should be safe, dignified and voluntary. If the Syrian regime wants refugees to return, it will need to convince them that they will not return to the status quo that led to and has sustained this conflict.

If the regime changes its behavior and engages genuinely in the political process, this will open the door to full resolution of the conflict. I would also like to thank the Under-Secretary-General, Mark Lowcock, for his briefing. Resolution 2254 is also clear on the importance of unfettered humanitarian access in Syria.

Earlier this month, the UN Global Humanitarian Overview for 2021 showed that 13 million Syrians now require humanitarian assistance. As we’ve heard, that’s nearly 75% of the Syrian population, and an increase of nearly two million people over the past year. OCHA warned that a protection crisis remains with needs resulting from hostilities, widespread explosive hazard contamination, psychological trauma, gender-based violence and family separation, among other things.

As winter takes hold, as we’ve heard from Mark Lowcock, there are continued gaps in aid delivery. COVID continues to spread and food insecurity continues to make life desperate. As the Global Humanitarian Overview sets out, more and more families are being forced to make unacceptable tradeoffs to survive, including skipping meals, taking on unsustainable levels of debt and, at great personal risk in freezing conditions, traveling to areas where assistance is more assured.

It is clear that efficient, effective, cross-border and cross-line access is essential to meeting the needs of these 13 million Syrians. As the Emergency Response Coordinator has said on multiple occasions, cross-border access is an essential element of the humanitarian response. With the loss of three border crossings over the course of 2020, the system is running at much reduced capacity. Aid running through Bab al-Hawa has never been more important.

So we are concerned to see OCHA reporting in December, that violence delayed delivery of aid in the north-west to 12,000 people, and prevented agreement on cross-line delivery there. The regime also denied access to a humanitarian delivery partner that tried to deliver food to 220,000 people in the north-east. While that suspension was lifted this month, it should not have taken high-level interventions to allow humanitarian workers to deliver food to those in need without fear of injury or harm.

The regime needs to acknowledge the scale and severity of the crisis and allow humanitarians to undertake their vital work. Any impediment is unacceptable.

In regard to the comments of my Russian colleague earlier, Russia and Syria have consistently provided interpretations of the conflict, which are not supported by the independent reports of the UN and the OPCW.

On sanctions, I refer to our statement at the UNSC political session on 19 August. The path to removal of sanctions is clear. Rather than interfering with aid, bombing schools and hospitals, detaining and torturing its people, the regime must heed the calls of its population, and engage seriously with Special Envoy Pedersen and the UN-led political process to achieve a peaceful end to the conflict.

Finally, Mr President, ahead of their departure from the Council, I want to thank our humanitarian penholders, Belgium and Germany, for their tireless efforts on Syria, for calling discussions when violence escalated, for trying to secure a ceasefire resolution on Idlib, and for securing at least some vital cross-border aid access into northern Syria. As we look to 2021 we should remain resolute in our collective efforts to resolve the crisis in Syria in line with resolution 2254.