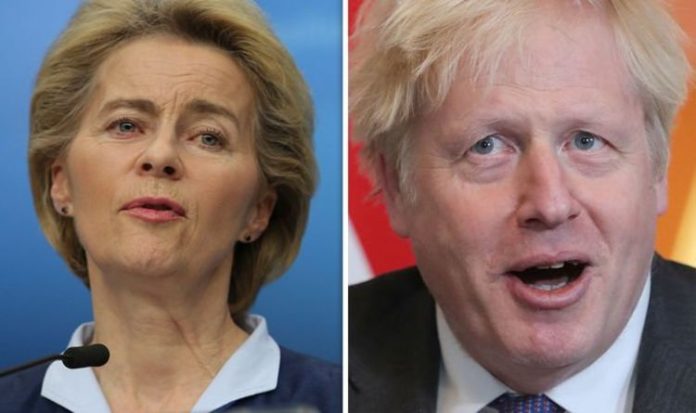 The UK and Singapore have signed a free trade agreement, delivering positive news for Prime Minister Boris Johnson, as the country remains locked in negotiations with the EU. International Trade Secretary Liz Truss signed the agreement with her Singapore counterpart Chan Chun Sing in the city-state last week. The new deal covers more than £17billon of trade in goods and services and largely replicates the existing EU-Singapore FTA.

Under the current arrangement, 84 percent of tariffs that apply to Singapore exports to the UK are exempted, with the balance set to be struck off by November 2024.

Ms Truss said the agreement was “part of a much wider strategic investment for the UK, taking us a step closer to joining Singapore” in the Comprehensive and Progressive Agreement for Trans-Pacific Partnership (CPTPP), a regional trade deal.

She added: “Joining the CPTPP would boost the UK’s “economic security, diversify supply chains and strengthen the global consensus for rules based free trade.”

It covers nearly 14 percent of the global economy and it was the centrepiece of President Barack Obama’s strategic pivot to Asia.

US participation was immediately scrapped by President Donald Trump on his third day in office but with Democrat Joe Biden soon replacing him at the White House, things might change.

In an interview with Express.co.uk, Alan Winters, director of the Trade Policy Observatory at the University of Sussex, claimed the EU is concerned about the possibility of the US and Britain joining together.

He said: “They definitely worry about it.

“The EU has agreements with quite a lot of countries in the CPTPP, but not all of them.

“It would make it much more difficult for the EU to conclude agreements with countries like Australia for instance, if Britain and the US were to join.”

Professor Winters added: “But the thing they are worried about is that there are a few places where CPTPP has rules that members accept.

“Digital trade is one of those areas.

“For the last decade, perhaps more, the EU has become a regulatory magnet.

JUST IN: France ‘bending EU as Macron’s veto more powerful than any other’

“Let’s hope they get excited by that prospect

“It would be a real enhancement for the UK and for all the other members of the partnership.”

When asked whether Britain’s entry might make it easier for a future US administration to come back to the partnership, Mr Abetz said: “That is a possibility.

“They seem to have issues with major trade agreements, they want to maintain their flexibility and independence.

“But the more we can engage the UK in world affairs, as a separate entity, the better it will be for everyone.”