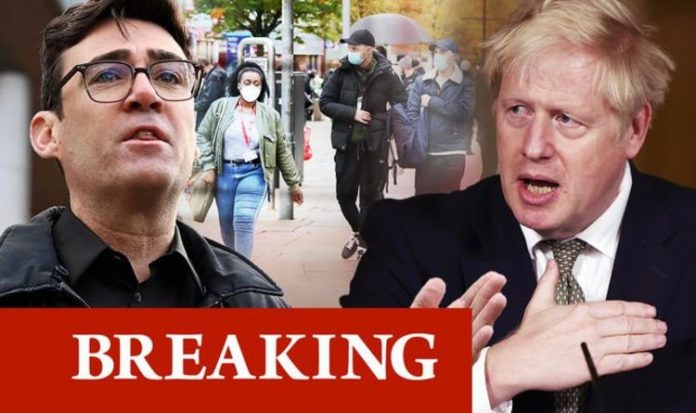 Experts are urging the Government to replace it with a circuit breaker lockdown to buy some time with winter looming – with one suggesting the longer the Prime Minister delays, the worse things will get. Hopes of a possible COVID-19 vaccine rose yesterday after the publication of a study by Bristol University suggesting the joint Oxford University/AstraZeneca drug which is currently the subject of clinical trials appears to be producing the hoped-for immune reaction.

However, there is no prospect of it being available in the short term – with Independent SAGE concerned by the failure to introduce a circuit breaker to coincide with half-term.

The current system features three tiers: Tier 1, Medium alert level, where the rule of six applies and pubs are required to shut at 10p; Tier 2, where people People are not permitted to mix with other households indoors; and Tier 3, where household mixing is banned and all pubs and bars are closed.

Most parts of England are in Tier 1 – but large areas of London and the Home Counties, the North West and the North East are in Tier 2.

Speaking prior to the start of the lunchtime briefing, Susan Michie, professor of health psychology at University College London, said: “I know this is the 11th hour, but it is not too late.

“We know that we have missed half-term for a lot of children, we know that this will be two weeks out of peoples’ lives but the alternative will be a longer and harder lockdown which will be worse for everybody.”

JUST IN: US Presidential election race is far from over claims Scaramucci

He wrote: “What we have at the moment is the worst of all worlds: a fudge which has resulted in measures that do enough harm to damage livelihoods but are not effective enough to control the virus and save lives.

“People showed clearly in spring that they will make major sacrifices if they can see the point.

“What they won’t do is to make sacrifices just for the sake of it.

“So, the local tier system we have ruins a good idea through botched and half-hearted implementation.

“It would not be fit for purpose at any time.

“But it is especially inadequate right now.”

Independent SAGE is seeking to highlight the high rates of infection among 10 to 19-year-olds, with current estimates suggesting a 15 percent positivity rate in that age bracket, as well as the fact that 46 percent of schools now have some pupils off.

“What we are looking at, unfortunately – given the Government doesn’t seem to be willing to shift on this when half-term holidays are coming up – what we are looking up to Christmas is an increasingly difficult situation in lots of parts of the country.”