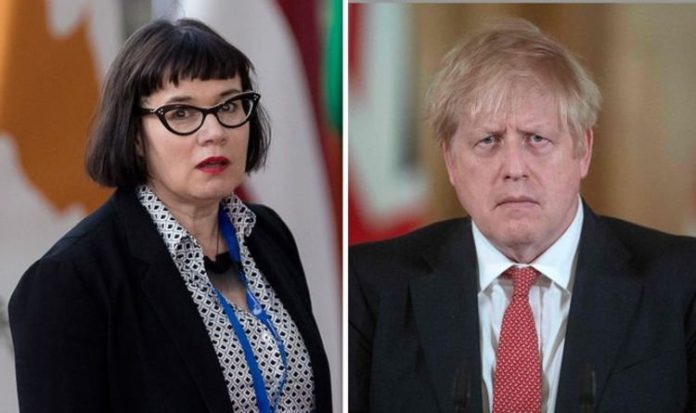 The UK’s vaccine supply is in jeopardy after the EU threatened to block exports of the Belgian-made Pfizer jabs amid a row with UK-based AstraZeneca. Brussels decided to impose tighter controls on exports after reacting with fury to the news that AstraZeneca will deliver 50 million fewer doses to the EU than it had expected. Ministers now fear deliveries of the Pfizer jabs will be delayed by extra paperwork and that the EU could try to stop doses being sent to non-EU countries after saying it will “take any action required to protect its citizens”.

In March, the bloc imposed export restrictions on personal protective equipment after it struggled with supply to its member states.

However, a Downing Street spokesman has claimed the Government remains confident that vaccine supply, with the AstraZeneca jab largely being made in Oxfordshire and Staffordshire, will ensure it meets its first target on February 15.

So far, the UK has vaccinated over 7 million people – the third largest total in the world. On the other hand, the whole of the European Union has vaccinated just over 9 million, despite accounting for 27 countries, according to figures by Our World in Data.

When asked about “how Brexit is going”, though, the Director General of Trade at the European Commission, Sabine Weyand, refused to answer.

“In ten words or fewer, is it going well, would you say?”

The question was followed by silence.

Chad Brown, a fellow at the Peterson Institute, added: “That’s it, we’ll just leave the silence for that.

Ms Weyand then noted: “I think it is time to put an end to the Brexit discussion.

“We now have a partnership and a cooperation agreement and that marks a new beginning.

“And I think we should look ahead and not backwards.”

In a recent report, the head of Oxford-based think-tank Euro Intelligence Wolfgang Munchau suggested Brussels’ “poor vaccine distribution” could actually be the final “nail in the coffin” before the union experiences a complete political and economic breakdown.

He argued that with its disastrous vaccine procurement policy, “the EU committed the ultimate mistake: it has given people a rational reason to oppose European integration”.

JUST IN: Von der Leyen could clash with Merkel over Germany’s economic model

He added: “But for me, the more important issue is the conclusions EU citizens will draw from it. For starters, the EU has just provided a hindsight argument in favour of Brexit. The UK would not have proceeded with vaccinations as quickly if it had subjected itself to the same policy.

“The last thing the EU ever wants to do is give people a rational, non-ideological reason for euroscepticism.

“It has just done that.”

He wrote: “The EU is trying to shift the blame to Pfizer and AstraZeneca.

“But in reality, this is a crisis of its own making.

“And as death rates start to fall dramatically in the vaccinated countries, the price will surely be a high one.”