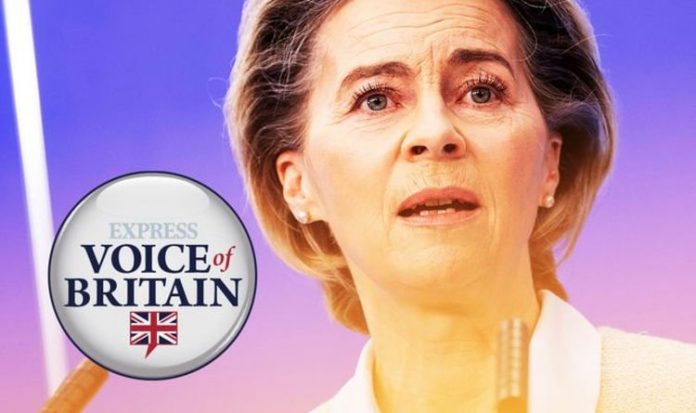 European Commission President Ursula von der Leyen is facing calls to quit amid fierce criticism of the slow roll-out of vaccines and a plan to curb exports that initially sought to set up a hard border on the island of Ireland, causing an outcry in London and Dublin. Ms von der Leyen admitted failings in the EU’s centralised system of vaccine approval and rollout but has showed no signs of bowing to pressure to stand down.

But the fall-out could spark a wave of anti-EU sentiment across the bloc and even the departure of some disillusioned member states.

An exclusive Express.co.uk poll has found 75 percent (2,904 people) of respondents thought more EU nations would now try to leave the Brussels club as a result of the jabs fiasco.

The survey found 22 percent (811 people) did not believe the debacle would lead to further Brexit-style departures while 3 percent (131 people) said they didn’t know.

Another said: “When states realise it has cost the lives of their citizens they must surely lose faith.”

Another reader said: “It beggars belief that member states continue to behave as if they are subordinate to this corrupt EU cartel who is just an inept contractor that is robbing them blind.”

And another said: “The vindictive and nasty protectionist cabal known as the EU shows its true face to the world – incompetent, dictatorial and with no thought for its citizens nor for anyone else for that matter.

“This protectionist and inward looking bureaucracy strikes out blindly in its death throes as it breathes its last.”

But she defended the Commission’s oversight of vaccine orders, saying it would have been unfair and “economic madness” for the EU single market if just a few large member states had guaranteed doses.

And she said the EU will launch a new network of clinical trials to give regulators data more rapidly and the Commission will create a taskforce to help boost vaccine production.