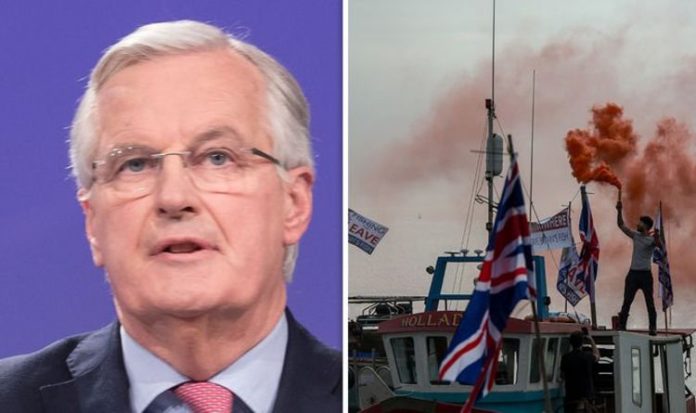 Brexit trade talks have stalled in recent months over two key issues – fisheries and regulatory alignment. Prime Minister Boris Johnson wants to fulfil a Leave campaign promise that the UK will take back control of its waters post-Brexit. Previously, EU vessels had free access to British fishing grounds, leaving many fishermen in the UK aggrieved. However, the EU’s chief negotiator – Michel Barnier – has warned Mr Johnson he cannot secure access to European markets without allowing EU vessels into UK waters.

The rows over these issues also plagued withdrawal negotiations, much of which Theresa May was Prime Minister for.

In February 2018, the European Commission published a four-page dossier which outlined demands to the UK once it had left the bloc and was in the Brexit transition period.

It showed that Brussels was looking to deny the UK a veto on fishing quotas during a transition period “sparking fears our trawler fleet could be wiped out”, reported that year.

Legal plans for the period immediately after Brexit (the transition period) were also unveiled.

They indicated that the EU only planned to “consult” the UK on fisheries during this period.

Alan Hastings, from the campaign group Fishing For Leave, expressed fury at the time.

He said: “Having no veto means the transition will present an existential threat to what is left of the British fishing industry and coastal communities.

“The EU will have little charity as the UK will be locked into legal purgatory where the EU could cull the UK fleet and claim ‘surplus’ fish the UK no longer has the capacity to catch.

“The Government and MPs must refuse the transition terms or they will consign another British industry to museum and memory.

“That Theresa May has known this all along means she, and her Remain-minded officials, are fully complicit in the embryonic stages of a second betrayal and sell-out of Britain’s fishing industry.”

He said: “Looking to the future, international law is abundantly clear that upon exit, control over the UK exclusive economic zone will revert to the UK Government.

“That will allow the UK to decide for our own waters who gets to catch what, where and when.

“But it doesn’t mean we won’t be willing to negotiate access. The difference is that it will be on our terms.

“Taking a hardline stance will not help as we move to the situation where international negotiations with the UK as a coastal state determine outcomes.”