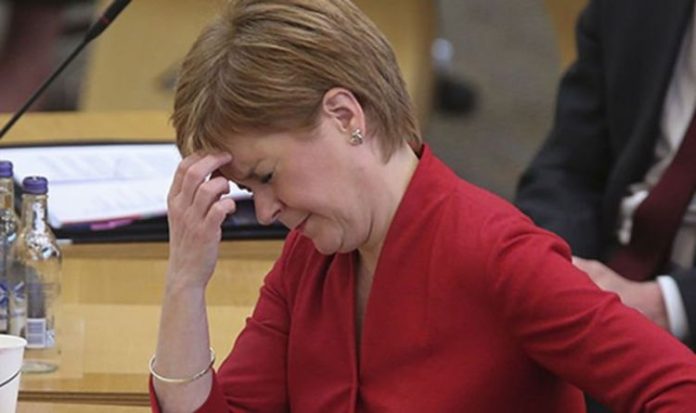 The Scottish First Minister made the admission in a Scottish Government coronavirus briefing. It followed hundreds of enrage pupils attending a demonstration in Glasgow’s George Square over SQA’s downgrading of poorer students results. Figures from the board revealed that kids who go to schools in poorer areas were twice as likely to have been penalised by the SQA as those in richer parts of Scotland.

Ms Sturgeon has shown support to the student protestors, claiming she “sympathised” with their frustrations over this years grades and that it was “very possible” she would have protested against the SQA as a teenager.

She also added that she knew how “really horrible this will be for young people that are in this position.”

But she told students to go through the appeals process to rectify their poor grade, and refused to instruct the exams watchdog to cancel grades.

Ms Sturgeon added: “I come back to the point that it’s just inescapable. We had faced a situation this year, where because of the pandemic, everything’s been turned upside down.

“So we’ve had to put in place a different system of assessing young people’s performance and, while I absolutely understand the concerns about the system that has been used, I think whatever system had been used to do this to substitute for the exams would have led some people to think it wasn’t fair.”

Exams were cancelled in Scotland due to the ongoing coronavirus pandemic, with students being assigned grades based on teachers recommendations.

But the SQA has based their final marks for students on their school’s historical performance.

A staggering 124,564 students saw their results lowered by the SQA, with the pass rate for pupils in the most deprived areas reduced by 15.2 percent from teacher estimates.

Students in the least deprived areas had their rate reduced by just 6.9 percent.

Ms Sturgeon has faced attacks from Scottish Green co-leader Patrick Harvie, who hit out at the First Minister’s “empty words”.

He said: “It’s not good enough for her to tell heartbroken pupils and teachers across the country that she sympathises.

“She was warned that the SQA’s approach risked this outcome and ignored those warnings.

“I’ll be joining the young people protesting in Glasgow tomorrow, demanding that a ‘no detriment’ policy be implemented in the appeals process as an absolute minimum.”

Ian Murray, a Labour MP, has savaged Ms Sturgeon as a “grade snatcher”.

He added: “Margaret Thatcher was known as the milk snatcher for stealing primary pupils’ milk in the 1970s, but Sturgeon is stealing children’s futures.

“She has failed a generation of young Scots, and her defence of the system’s inequality reveals that education is far from her number one priority.”

Jim Sillars, the former SNP deputy leader, added that poorer students have “worked their socks off” only to be judged on their background.

He said: “What the SQA have done, they have damned and injured the life chances of a large number of children by their decision – which is in my view a ludicrous one.”