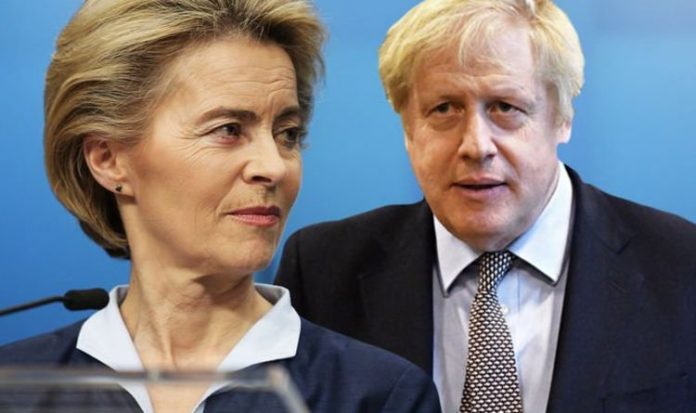 Brexit trade talks are going down to the wire as the EU and UK continue to row over fishing rights, state aid and regulatory divergence. Prime Minister Boris Johnson and European Commission President Ursula von der Leyen are in talks in an attempt to break the deadlock before talks in Brussels are expected to pause on Christmas Eve. Michel Barnier, the EU’s chief negotiator, told MEPs on Tuesday night that he had done all he could to break the deadlock on fishing, and has reportedly warned Christmas is now the deadline for a deal.

The talks have only further emphasised the division that exists between Brussels and London.

However, Belgian MEP Philippe Lamberts – who is also a member of the European Parliament Brexit Steering Group – tells Express.co.uk that he “understands the anger” of Britons who voted to leave in 2016.

“But was Brexit the right answer to that question? I would say no.”

The Co-President of the European Greens argues that many Brexiteer politicians “lied about the facts” and said he can’t be friends with Nigel Farage or Dominic Cummings.

He added: “I do resent those who likened the EU to the Soviet Union, we are not forcing the UK to stay.

The MEP went as far as to claim the UK may even rejoin the EU, however he said it would take a generation before this is possible.

His predictions contrast with that of Tory Brexiteer Andrew Bridgen, who told Express.co.uk that the UK could make new allies and dethrone the EU as the world’s biggest trading bloc.

The MP for North West Leicestershire said Commonwealth allies such as Australia and Canada could provide lucrative alternatives to trade with Europe.

He said: “America, Canada, Australia and New Zealand – we will get all of those – and I’m confident we will get them very quickly.

“And also that ramps up the pressure on the EU, because when you are buying off someone you only need choice don’t you?

“If we join the Trans Pacific Partnership, it will be a bigger trading bloc than the EU.

“And they aren’t asking to take our fish or be governed by their laws and courts.”