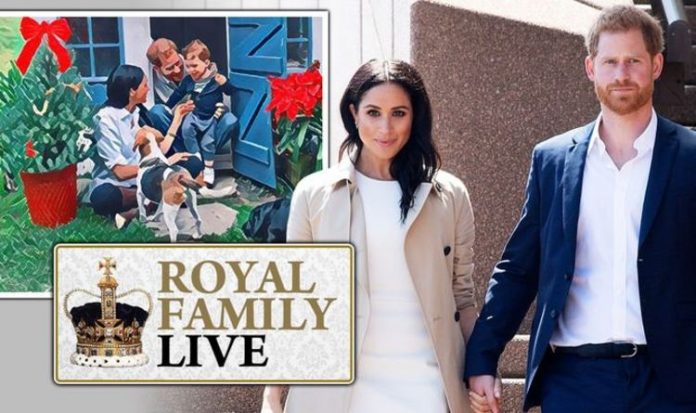 The Duke and Duchess of Sussex along with their 19-month-old son Archie and pet dogs are depicted in a stylised image in the gardens of their home in California. The family portrait shows Harry squatting down at the front of a Wendy house while he holds a beaming Archie who is able to stand. Meghan who is sitting cross-legged on the grass, can be seen smiling into the eyes of her son, who the Sussex’s said helped to choose the ornaments for the Christmas tree.

The original photo – which has since been doctored into a “Cartoon-style” graphic – was taken by Meghan’s mother Doria Ragland.

The unique festive card has divided opinion amongst many users on Twitter, who complained about the quality of the snap, while others branded the couple – who left the Royal Family for privacy and to become financially independent – as attention seekers.

A second said: “I thought we’d see the real Archie, not a cartoon version.”

A third commented: “What an odd card. Intention is not to show Archie.”

Meanwhile, a fourth said: “Very strange and don’t like it… doesn’t look Christmas holiday season at all… looks spring.”

But, many others were very fond of the greetings’ card, one user wrote: “I love this card it is very different. Not because it has Harry, Meghan, and Archie on it but because the design reflects family.”

The card was issued to the animal welfare charity Mayhew and the Duchess – who is a patron of the organisation – gave an undisclosed personal donation from the royals.

In the card, Meghan said: “This year we, as a family, have made donations to several charities with you in mind.

“From a local California organisation that helps families transition out of homelessness, to two of our UK patronages: one that supports animal and community welfare, and the other, a memorial fund for a cherished friend that helps to educate children and fight poverty in Uganda, we have honoured their work on behalf of all of us.”

Princess Diana has been ranked the most attractive royal by a cosmetic doctor, who used the Golden Ration to show how symmetrically beautiful the late royal was.

The Princess of Wales ranked top of the five he examined, beating out Queen Rania of Jordan, Princess Grace of Monaco and both Kate, the Duchess of Cambridge and Meghan Markle.