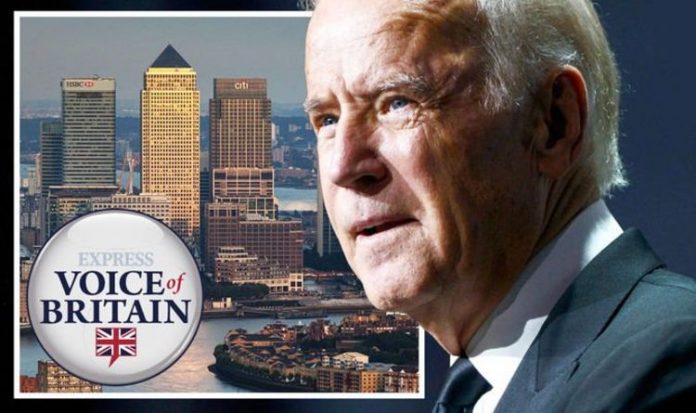 Negotiations over a memorandum of understanding are taking place between the UK and EU to decipher what role the financial market will have going forward. An early draft of the agreement does not include certain provisions for the UK, meaning the US will have greater influence in European markets. There is no mention of outcomes-based equivalence in the draft EU-UK memorandum, in contrast to the agreement with the US.

Amid the threat of the US taking a greater hold of European markets ahead of the UK, Express.co.uk readers called on the Government to hit back against Washington.

One person said: “Why don’t we put Biden at the back of our queue?”

A second said: “Tell Biden UK will withdraw our military presence in Iraq and Afghanistan.

“He will have to pay for his use of military bases in the UK and in the Oversea territories.

“US companies will have to pay the same amount of tax that British companies pay.

A third reader urged the UK to reduce its ‘special relationship’ with the US.

They added: “The special relationship is going well under the Democrats then.

JUST IN: Brexit LIVE: Panicked Ireland to CUT own fishing fleet due to Brexit

Within the Trade and Cooperation Agreement, there are no provisions for the UK’s financial market.

This mean UK firms and institutions have not been granted equivalence to trade in the EU.

Due to this, they must adhere to two sets of regulations which has caused some to relocate to financial centres in Frankfurt and Amsterdam.

Although negotiations are progressing, it is not thought the EU will grant the UK equivalence.

Two experts from Bloomberg have concluded this will allow the US Stock Exchange to become even more influential due to the favourable terms it has with the EU.

Elisa Martinuzzi and Marcus Ashworth said: “New trading limits between the UK and the continent have prompted a large chunk of this lucrative work to move across the Atlantic.

“Clawing back the trillions of dollars of activity that’s leaving London, quite literally overnight, could be a long slog.

“With counterparties from the EU now restricted from trading in Britain, and vice versa, dealers and investors predictably resorted to trading more interest-rate swaps in the US, a market that both the EU and the UK still recognise.

“But the degree to which the shift happened, without any obvious market glitches, has caught some participants by surprise.”