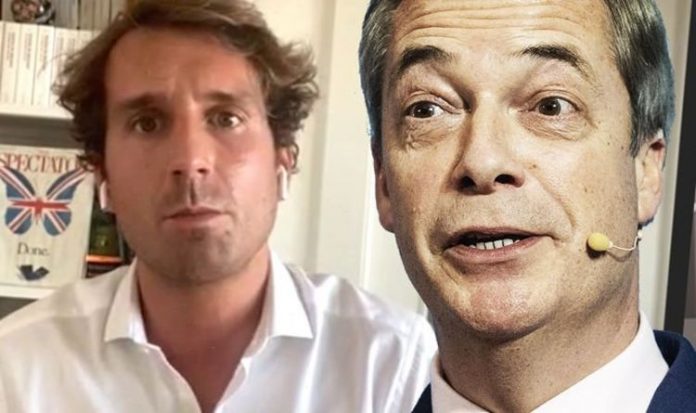 Charles-Henri Gallois has launched a new campaign, inspired by both the Brexit Party and Vote Leave. Mr Gallois wants France to “reprenons le controle”, which roughly translates to take back control, and leave the EU through a referendum. Brexit Party colours and fonts are used in his new campaign named Generation Frexit.

In an exclusive interview with Express.co.uk, the prominent French eurosceptic said: “For me, the British Brexit campaign was incredible.

“It was a war for European nations to take back control.

“What we want to do is help the French secure a referendum on our country’s membership of the European Union – and to advocate for Frexit during this referendum.”

When asked whether Mr Farage would be invited to help him with his crusade, Mr Gallois said a coalition with the Brexit Party leader could indeed be in the making.

Mr Paragone has also drawn a great deal of inspiration from Mr Farage.

The two sat down for a chat two days prior to Mr Paragone’s announcing his new endeavor in the Italian Chamber of Deputies.

Speaking at Liberty University in Virginia in early February, Mr Farage admitted he wasn’t planning on giving up on politics.

He said: “I haven’t finished with just getting the United Kingdom out of the European Union.

“I won’t settle until I get the whole of Europe out of the European Union.”