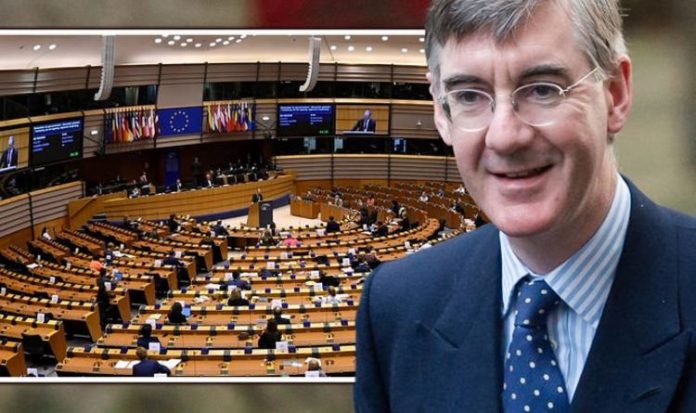 The EU’s democratic processes have come under fire in the wake of the Brexit vote as it was one of the key drivers behind the UK’s decision to leave the bloc in 2016. The EU’s methods, however, have been the source of debate for much longer. UK in a Changing Europe Fellows Sara Hagemann and Simon Usherwood, highlighted some of these in 2016. They pointed to the fact that the European Council holds many sessions in private, and sometimes only make some information publicly available.

The European Parliament, the institution of the EU where members are directly elected by voters, also only appears to have limited powers.

Mr Rees-Mogg, currently leader of the House of Common, hit out at the way representation is distributed within the bloc in a speech at the Oxford Union.

He used the example of Malta, which has one MEP slot for every 70,900 Maltese, while the UK had one MEP for every 880,000 British voters.

The MP for North East Somerset branded this a “gerrymandered voting system”.

He said: “Decision making in the Council of Ministers is now almost entirely made by qualified majority voting, and I thought you would be interested to know that the UK has 29 votes in this system compared to Malta that has three.

“That means per head per Maltese population, they have 15 times more influence in the Council of Ministers, ladies and gentlemen, than you do.

“So we are back to rotten boroughs really. Not a bad thing you may say.

“When they were abolished it was said that no more could young people get into Parliament and as so many of you may be looking for parliamentary careers, you may think we should introduce one or two at the next election.

“But you better go off to Malta because that’s the rotten borough of the European Union.”

She also attracted criticism from across the political spectrum in Germany, as former leader of the Social Democrats Martin Schulz described Ms von der Leyen as “the government’s weakest minister”.

The Greens bemoaned Ms von der Leyen’s nomination as an “old-school backroom deal”, the pro-business Free Democrats said she was “not the best candidate”, the far-right AfD said her selection would amount to “cheating voters”.

Meanwhile, French President Emmanuel Macron praised the former German Defence Minister for having “the DNA of the European community”.