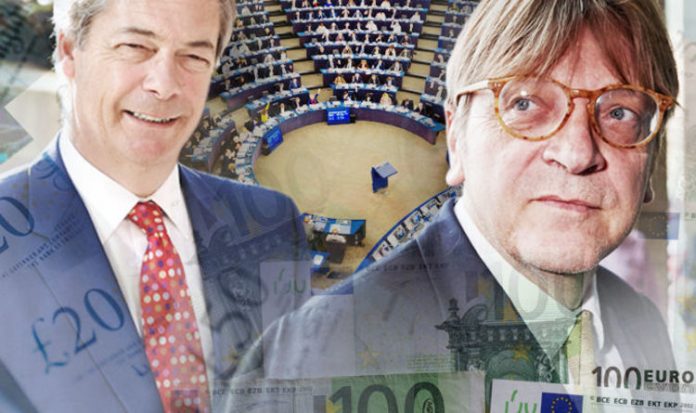 The self-proclaimed ‘anti-corruption coalition’ published a list of featuring a list of 1,366 extracurricular activities declared by MEPs since they took up their mandate in 2014.

The analysis of the EU Parliament’s public records pits Britain’s Nigel Farage against his political nemesis Belgian MEP Guy Verhofstadt, who between them racked in almost €2m thanks to their extra jobs.

However, they are both trumped by international poker star and Lithuanian MEP Antanas Guoga, who has has made as much as €1.5m thanks to his efforts moonlighting at the cards table and as a businessman.

MEPs already earn €101,808 a year before a lowered tax rate of 22 percent for EU officials, as well as receiving thousands extra in expenses for staff, travel and office costs – worth up to an estimated €400,00 a year each.

As well as staff allowances, MEPs are able to earn more than €90,000 a year in “daily subsistence” and “general expenditure” which is paid into their bank accounts without having to provide receipts or proof of expenditure.

According to Transparency International, Mr Farage, 54, is the highest earner outside the EU Parliament of any of the Britain’s 73 MEPs.

Mr Farage hosts numerous show on LBC as well as being a commentator for American television network Fox News.

Former Belgian prime minister Mr Verhofstadt is well known to Britons as the head of the EU Parliament’s Brexit Steering Group, negotiating on MEPs behalf before the withdrawal agreement is presented to them for ratification.

The 65-year-old, who enjoys racing vintage British cars and own a Tuscan vineyard, appears third on the list having earned between €920,614 and €1.45m as a director of Brussels-based investment firm Sofina and on the after dinner speaking circuit.

Topping the list, Italian socialist Renato Soru has earned €1.5m as director of Italian telecommunications firm Tiscali. In second place, Lithuanian Mr Guoga having earned between €1.36m and €1.48m from his online businesses and poker.

A spokesman for the Europe of Freedom and Direct Democracy group, of who Mr Farage is chairman for, didn’t dispute the British MEP’s extra earnings.

The spokesman said: “Mr Farage has declared his income in the financial declaration like every other MEP.

“Everybody is welcome to look at it.”

Mr Verhofstadt’s spokesman insisted the Belgian “always declared his mandates openly and publication the website of the European Parliament”, adding: “He also stresses that he is not lobbying for companies and also believe that indeed there should be no lobbying by MEPs.”

The Transparency International study shows almost a third of the Parliament’s 741 MEPs have a second job or an outside income, 104 of those declared earnings of more than €100,000 each over the past four years on top of their salaries as full-time members of the European Parliament.

Daniel Freund, of Transparency International EU, said: “Large outside incomes pose a serious risk of conflicts of interest. Whose interests do these MEPs really represent? That of citizens or the interest of those that pay their side jobs?”