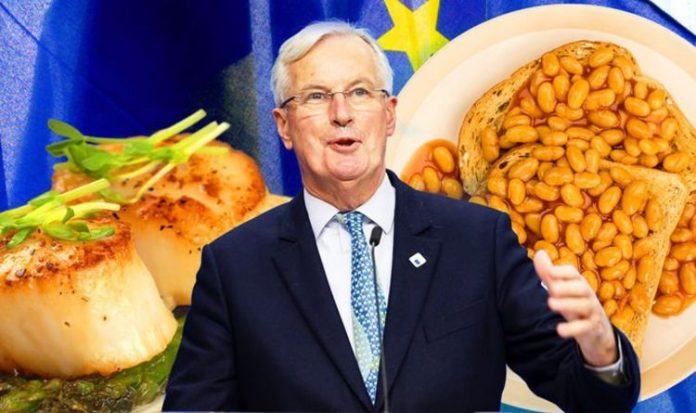 Fish has proved one of the most contentious areas in the Brexit trade deal, but it was served to Prime Minister Boris Johnson on a plate during last-ditch talks in Brussels. Yesterday, Mr Johnson and President of the European Commission Ursula von der Leyen dined on a starter of scallops and a main course of steamed turbot at the Berlaymont building. Negotiations have faltered on fishing rights, among other issues, and the Commission’s menu was seen as a pointed gesture by some.

Mr Johnson and Mrs von der Leyen were served pumpkin soup and scallops to start, followed by a main course of steamed turbot, mashed potatoes with wasabi and vegetables.

The starter might have also invoked memories of the “scallop wars” in 2018, when British and French fishing fleets clashed in a dispute about access to fishing grounds in the Baie de Seine.

It is not the first time EU officials have tried to mock the British with food, though.

After the 2016 EU referendum, former Prime Minister David Cameron flew to Brussels to brief EU leaders on the result and to explain why it went so disastrously wrong for him.

An EU official close to the talks said the other 27 wanted to hear his “explanation of the situation in the UK that led to the vote” and his “timeline” for the tortuous process of pulling out of the EU.

The source described the mood at the Brexit summit as “very serious”.

However, that did not stop a Czech official joking about the decidedly un-English dinner menu at the European Council.

Tomas Prouza, the former Czech State Secretary for European Affairs, wrote on Twitter: “No beans in tomato sauce nor pudding for the dinner tonight.”

Back in London, former Brexit Secretary David Davis agreed with his counterpart.

He said: “Whenever there is a continental breakfast, it is always better to eat a proper one first.”

Britain and the EU have until December 31 to strike a deal on their future relationship.

If no agreement is struck by then, the two sides will start trading under World Trade Organi