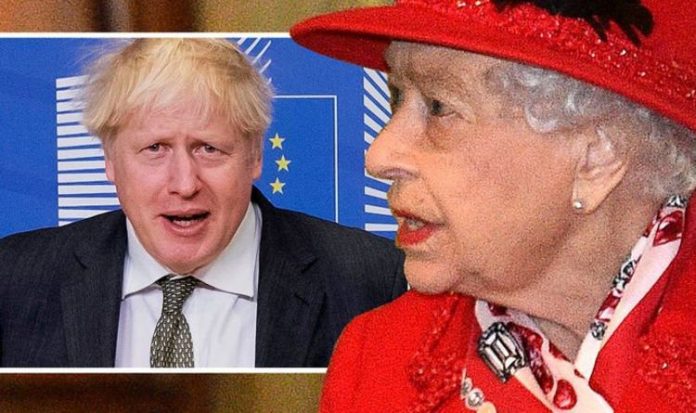 The Queen’s weekly Wednesday audiences with Mr Johnson have continued by telephone throughout the pandemic pausing only when the PM was in hospital receiving treatment for Covid-19.

However, this week the meeting was called off as Mr Johnson remained in Brussels attempting to hash out a post-Brexit trade deal with EU Commission President Ursula Von der Leyen.

The Prime Minister travelled to Brussels on Wednesday for a three-hour working dinner with Ms Von der Leyen.

The last-ditch negotiations have been extended until Sunday following Wednesday’s meeting.

While Buckingham Palace has traditionally been the Queen’s administrative base, the decision was made to move it to Windsor Castle during the pandemic.

The Queen is thought to be safer living outside the capital where infection rates are higher.

Last week it was confirmed that the Queen and Philip will spend Christmas Day at Windsor Castle for the first time in 33 years.

Usually, the couple marks the holiday at Sandringham where they welcome extended Royal Family members from Christmas Eve until Boxing Day.

However, this year the royal couple have dramatically pared-back their plans amid the pandemic.

They may meet Royal Family members for walks in the grounds of Windsor Castle as regulations are relaxed from December 23 to December 27.

Given that they are both in their 90s it is thought unlikely that they will invite family round for Christmas lunch this year.

The Queen delighted royal fans on Wednesday by stepping out to thanks local volunteers and frontline workers at Windsor Castle.

She was joined by senior royals including Kate, Duchess of Cambridge, Prince William, Prince Charles and Camilla, Duchess of Cornwall for the special engagement.