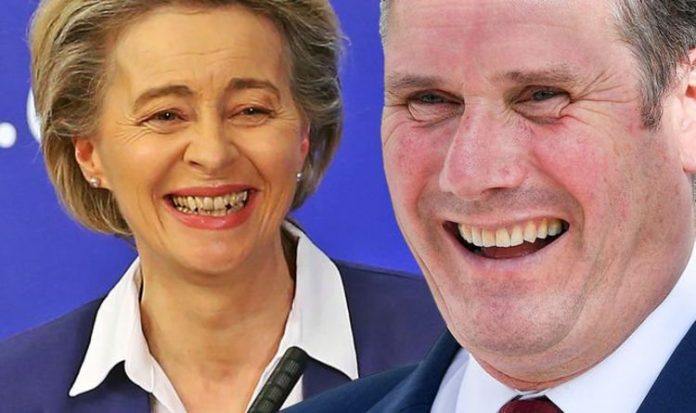 European Commission President Ursula von der Leyen yesterday admitted that the EU’s coronavirus vaccine rollout had failed. It came as the bloc fell desperately behind the UK, which has become a world leader in its mass vaccination programme. Britain’s efforts were almost thwarted last week after the EU moved to cut-off its vaccine supplies – provided by the Oxford-based AstraZeneca that has production facilities on the continent – and triggered Article 16 of the Brexit deal.

The latter momentarily erected a hard border on the island of Ireland and furthered an already tense geopolitical situation.

Brussels’ critics said it was a clear indicator of the EU’s protectionism – which is often denied – while the World Health Organisation (WHO) head, Tedros Adhanom, warned of a “protracted recovery” from the pandemic if outfits like the EU pursued “vaccine nationalism”.

According to several polls, the crises translated as a rare moment of unity in Britain, bringing eurosceptics and pro-EU supporters the closest they had been in four years.

The crisis has, however, hurt some domestic politicians, including Labour leader Sir Keir Starmer, who was forced to apologise to Prime Minister Boris Johnson after he wrongly suggested the Conservative leader had lied about him during Prime Minister’s Questions.

It came during a heated debate about the European Medicines Agency, which is organising the continent’s vaccine distribution, when Mr Johnson called-out Sir Keir for previously wanting the UK to stay in the health collective after Brexit.

Sir Keir told the House of Commons that he’d “never said that,” and that the “truth escapes him (Mr Johnson)” – in fact, staying in the EU’s medicines regulator was Labour’s policy while Sir Keir was Shadow Brexit Secretary.

He manoeuvred himself into the role under former leader Jeremy Corbyn in 2016 and held it until becoming leader in April 2020, creating a Remain stronghold in the Labour Party led by a historic europhile.

Although Sir Keir has since said that his party respects the outcome of the referendum, even whipping his MPs to support Mr Johnson’s Brexit deal in December, Paul Embery, a trade unionist and Labour member, told Express.co.uk that there remains an element of the party that is “fanatically pro-EU” and will likely support Ms von der Leyen’s European Project in the future.

JUST IN: Oh dear, Keir! Boris preparing to fight Burnham at next election

Keir Starmer: The Labour leader has been heavily pro-EU in his politics (Image: GETTY)

On the topic of the 37 Labour MPs who voted against or abstained on the Brexit deal, Mr Embery said: “There will always be people in the Labour Party who will be irreconcilable as far as departure from the EU is concerned.

“There are some people who are so fanatically pro-EU that they just won’t accept the outcome in any way shape or form.

“I just say to those people, ‘Look, it was that attitude and refusal among a large part of the party to accept the referendum result that led to the wipeout of Labour in the 2019 election’.

“Something like 50 of the 54 constituencies that went from Labour to Tory in the general election voted for Brexit.

“It was pretty clear that Brexit was a huge issue on the doorstep in working class communities that voted for it, and they saw Labour trying to prevent it.

“Frankly, if there are MPs who still don’t get that message after what happened at the last general election and are now talking about rejoining, I think that would be electorally devastating.”

Mr Embery went on to note the now famous incident of Peter Dowd, the Labour MP for Bootle, who, in 2017, speaking on the BBC’s Daily Politics, forgot that his constituency voted to leave the EU, his position being to put a vote to the people.

This was quickly called a “People’s Vote”, which Sir Keir was largely considered a main architect of, having given speeches at pro-EU rallies in London.

Brexit news: Starmer has flip-flopped on his Brexit policy over the years (Image: Express Newspapers)

Despite having pledged to keep in place the free movement of people with the EU last year, Sir Keir in December scrapped a number of his pro-EU election pledges drawn up shortly after he became leader in April 2020.

He said Labour would now make a “clean break” from Brussels and will not seek “major changes” to its relationship with the UK, vowing to shift the party’s focus on “Britain for the 2030s”.

Many noted that the announcement moved in line with Sir Keir’s “national pride” agenda, as he looks to make Labour the “patriotic party”.

It lost swathes of its working class voter base in the 2019 election – the so-called Red Wall – and has since struggled to curry favour with constituents in the north of England, the Midlands, and Wales.

Patriotism: Starmer has pushed Labour as the ‘patriotic party’ of Britain (Image: Twitter/@Keir_Starmer)

A leaked memo earlier this month told of how the party planned to win back working class voters with “the use of flags, veterans, dressing smartly at the war memorial etc give voters a sense of authentic values alignment”.

Revealed by The Guardian, the publication noted that it showed how Sir Keir was willing to play “identity politics” in an already fragile culture landscape.

While Labour pursues this, Steven Fielding, Professor Professor of Political History at the University of Nottingham, said Sir Keir is diligently working to strengthen the party, being careful to rid himself of previous ties to the EU.

“He doesn’t want to be seen as going against the decision of the British public that was pretty clear in the 2019 election.

“So this is one reason for his current position: He doesn’t want those Red Wall voters, those Leave voters to be pushed away further and allow Johnson to paint him in any kind of way as a reluctant leaver.”