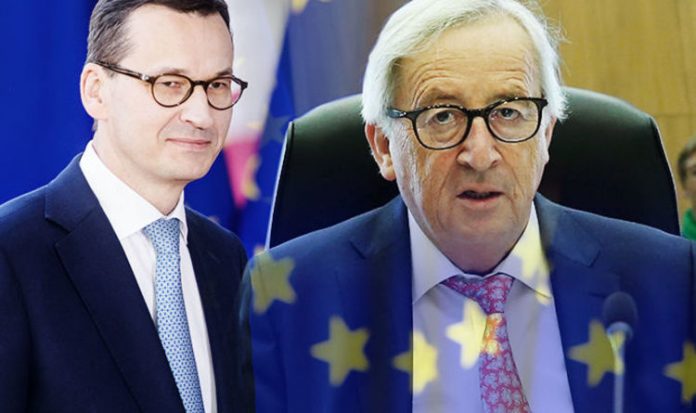 Brussels has been highly critical of Poland’s government as the ruling Law and Justice party controversially overhauls the country’s supreme court, which has left the European Commission and Warsaw in a bitter stand-off.

The law will come into effect on Tuesday, July 3, and will force the supreme court’s president, Malgorzata Gersdorf to step down early. Law and Justice argues the reforms are needed to improve an inefficient system that has not been overhauled since communist times.

Announcing the start of legal proceedings against the Polish government, a Commission spokesman said: “While the Polish supreme court law has already been discussed in the context of the rule of law dialogue between the commission and the Polish authorities, it has not been satisfactorily addressed through this process.”

“According to the law, current judges are given the possibility to declare their will to have their mandate prolonged by the President of the Republic, which can be granted for a period of three years and renewed once,” added a press release.

“There are no criteria established for the president’s decision and there is no possibility for a judicial review of this decision.

“The Commission is of the opinion that these measures undermine the principe of judicial independence.”

Brussels fully intends to continue its rule-of-law dialogue with Poland, leaving Warsaw one month to respond to the Commission’s formal letter.

However, the Commission’s letter comes too later to actually stop the forced retirement of Polish supreme court judges, which comes into effect tomorrow.

If Brussels is not satisfied with Warsaw’s response, the bloc’s leaders can choose to take Poland to the European Court of Justice over the reforms.

The escalation comes after numerous attempts by Polish prime minister Mateusz Morawiecki to end the bitter debate with Brussels by putting forward amendments to his judicial reforms. Failing to satisfy the Commission, changes were branded insufficient by EU vice president Frans Timmermans.

In December, Brussels triggered Article 7 proceedings against Poland over “systematic threats” to the rule of law, which could see Warsaw lose its EU voting rights.

Mr Morawiecki will face MEPs as he delivers a speech at a “future of Europe” at the European Parliament in Strasbourg on Wednesday.