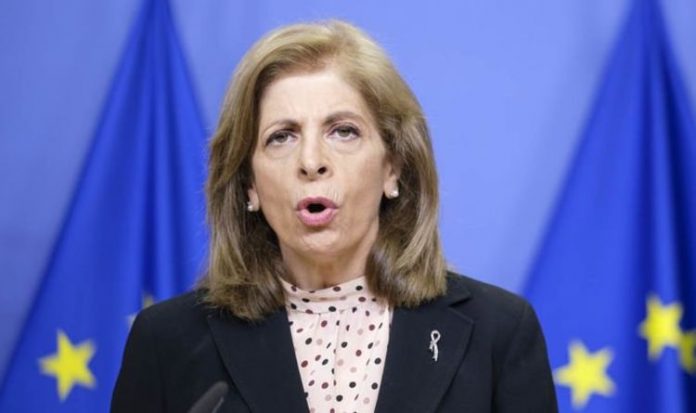 Health commissioner Stella Kyriakides announced controls on firms wanting to export doses out of the bloc. Manufacturers will have to provide “early notification” to the European Commission if they plan to sell abroad. Ms Kyriakides added that if firms failed to comply, “the EU will take any action required to protect its citizens and rights”.

It came as Germany demanded drug giants secure approval from eurocrats for shipments leaving the bloc.

German health minister Jens Spahn said: “We must be able to know whether and what vaccines are being exported from the EU.An obligation to get approval for vaccine exports on the EU level makes sense.”

She accused CEO Pascal Soriot of breaching “contractural arrangements” to supply up to 400 million doses to EU capitals.

AstraZeneca, the maker of the Oxford-developed jab, did not announce similar plans for Britain, which paid almost double the price per dose paid by Brussels.

The EU’s drugs watchdog is set to approve the AstraZeneca vaccine by Friday – a month later than it was authorised by the UK.

The Anglo-Swiss firm said it could only deliver around 30 million jabs to the EU due to production hiccups.

Britain has so far administered 6.8 million doses, whereas EU countries have struggled to rollout just 8.5 million across their population, which is seven times larger than ours.