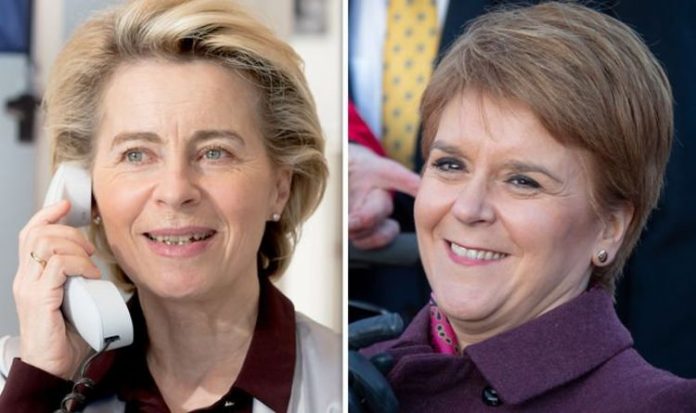 On January 1, the post-Brexit transition period expired, meaning EU rules no longer apply in Britain. It is a new chapter for the country’s national history – but not everyone in the UK is happy about the new arrangements. Despite Prime Minister Boris Johnson rejecting her independence demands and the devastating economic impact of the coronavirus pandemic, Scottish First Minister Nicola Sturgeon is determined to hold a second referendum in 2021.

While Brexit might have made the case for Scottish independence stronger, though, it has also made it practically more difficult.

Scotland would need to apply to join again under Article 49 of the Treaty of the European Union and new members can only be allowed into the bloc through an unanimous vote from existing member states.

Spain is struggling with secession demands itself, from Catalonia, so is unlikely to support a newly independent state.

Many also believe Scotland could be rejected by Brussels due to its current deficit of seven percent of GDP, unless it adopted a strict austerity programme from the EU as well as potentially adopting the euro.

In an exclusive interview with Express.co.uk, Italian MEP Marco Campomenosi reiterated that the chances of an independent Scotland joining the EU are very low.

However, he revealed how, in order to disrupt internal politics in the UK, Brussels did court Ms Sturgeon at the beginning of the Brexit talks.

“During the withdrawal agreement talks, the former President of the European Commission Jean-Claude Juncker was courting the Scottish nationalists, making them believe they were welcome in the EU.

“It was only done to destabilise the UK Government.

“Brussels could have not had the same attitude towards the Catalans because Spain strongly supports the European Commission.

He added in another interview with Express.co.uk: “I very much admire the British people for defending their national interests with such courage.

“When Brexit was voted in the UK, our position has always been to respect the will of the British people.

“We were appalled by the attitude of the EU who wanted to punish Britain for leaving.

“Their attempts to destabilise Britain with Scottish independence and then in Ireland were totally despicable.”

Ms Sturgeon’s campaign for independence in the wake of the 2016 EU referendum result received a mixed response in Brussels.

As the SNP leader visited the Belgian capital, the German government told the Glasgow Herald it was an “internal” British issue and declined to comment further when asked if it would engage directly with the Scottish government.

Denmark said its minister for foreign affairs “would have not intervened in the internal UK discussions following the referendum”.

The Czech government also said it was “premature to address the question of an independent Scotland and its relation to the EU”.

DON’T MISS:
Brexit fishing solution that bypasses EU proposed by Le Pen’s aide [EXCLUSIVE]
Warren Buffett’s brutal analysis of eurozone: ‘Hope US never does it!’ [VIDEO]
Biden could pull rug from under UK’s Brexit dream as US is ‘ruthless’ [ANALYSIS]

Some europhiles like Belgian MEP Guy Verhofstadt and former President of the European Commission Jean-Claude Juncker did send mixed signals to Ms Sturgeon, however.

In February 2017, the former European Parliament’s Brexit coordinator told The National that Europe was aware that a clear majority of Scots had voted to remain within the European Union in the 2016 EU referendum.

“We need the Scottish people and their firm European beliefs.

“Scotland has shaped European civilisation, through iconic figures such as David Hume, Alexander Fleming and Adam Smith and does so today by being at the forefront of defining and strengthening European values.”

Shortly before the 2016 Brexit referendum, Mr Verhofstadt also claimed: “If Scotland decides to leave the UK, to be an independent state, and they decide to be part of the EU, I think there is no big obstacle to do that.”

He added it would be “suicide” for the EU to refuse entry to people who are “sympathetic” to the EU’s aims.

Moreover, after the referendum, Mr Verhofstadt wrote on Twitter: “It’s wrong that Scotland might be taken out of the EU, when it voted to stay.