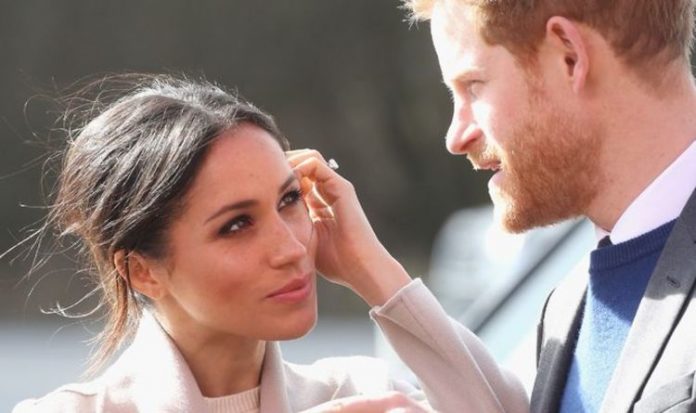 The Telegraph’s associate editor Camilla Tominey said Meghan and Harry’s tell-all interview with Oprah Winfrey, which airs next week, will “set the tone for the Sussexes’ future forays into the spotlight”. She added that the couple, who are living in California after quitting royal duties, are attempting to “rewrite the history of their departure from the Firm through the medium of philanthropy and self-promotion”.

Ms Tominey made the comments after Harry opened up to TV host James Cordon about Megxit during an appearance on The Late Late Show.

Writing in the Telegraph, the royal expert said: “By conveniently making no mention of their desire to ‘work to become financially independent’, as stated in their original ‘Megxit’ bombshell of Jan 8 last year, Harry made the blame-the-British-press strategy plain as he complained of the ‘toxic’ environment.

“It may well prove to be a winning formula in America, where the rich and famous can control a media that largely worships at the altar of celebrity.

“Yet while many will rightly feel sympathetic towards Harry for the mental anguish he has suffered, they are also likely to have more reliable memories than his new-found and famously fickle US audience.”

Ms Tominey added that the Duke and Duchess of Sussex “risk accusations of having ideas above their station” by demanding positive coverage in the press, insisting there are “two sides to every story”.

Harry took an open-top bus tour of Los Angeles with Cordon in an interview recorded before it was confirmed his and Meghan’s exit from the Royal Family would be permanent.

The Duke said: “It was never walking away.

“It was stepping back rather than stepping down.

Harry also defended Netflix’s The Crown, rapped the theme song to the 1990s sitcom The Fresh Prince Of Bel-Air and revealed the Queen’s Christmas present to his son Archie.

And the show featured a short appearance from former actress Meghan via video call.

Next Sunday, the Sussexes’ bombshell interview with Winfrey will air on US television network CBS.

Ex-Suits star Meghan will chat about royal life before she is joined by Harry to discuss their future plans following their move to America.

Meghan, 39, and Harry, 36, quit royal duties in March 2020 and it was confirmed earlier this month that they will not be returning as working members of the monarchy.