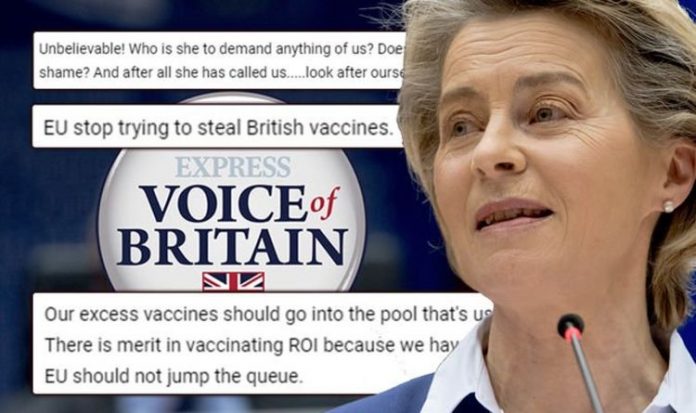 The EU27 has been plunged into crisis after its supply of Oxford/AstraZeneca jabs was slashed following production issues at a manufacturing plant in Belgium. The UK has ordered more than 100million doses of the vaccine developed by scientists at the University of Oxford, and the Government placed its order three months before the EU.

Last week, AstraZeneca said vaccine supplies to the EU would be cut by as much as 60 percent until March.

Panic then began to swarm across the bloc, and on Friday EU officials moved to trigger Article 16 of the Northern Ireland protocol, agreed in the Brexit withdrawal agreement, in a bid to control the flow of vaccines out of Europe – before making a sudden U-turn.

But, the EU chief has called on AstraZeneca to send doses of the vaccine produced in the UK to Europe.

This demand has triggered a furious response from a number of Express.co.uk readers, with one saying “the EU should not jump the queue”.

Commenting on a story on this website, one reader said: “Our excess vaccines should go into the pool that’s used for the whole world.

“There is merit in vaccinating ROI because we have a common travel area – but the EU should not jump the queue.”

Another said: “Unbelievable! Who is she to demand anything of us?”

Its original order was of at least 80 million doses by the first quarter of 2021, according to EU sources.

In an interview with a group of European newspapers, Mrs von der Leyen claimed there was nothing to prevent vaccines being shipped from Great Britain to Europe.

She said: “Our contract with AstraZeneca is clear. There is no condition for its execution and nothing prevents the industrialist from delivering us doses produced in the United Kingdom, as stipulated in the contract, especially since London does not prohibit it.

“It’s up to AstraZeneca to organise itself to deliver to its customers, that’s none of our business. What we want are plausible explanations and a schedule for upcoming deliveries.”

EU member states have so far given first doses to around three percent of their adult populations.

Ms von der Leyen has been called to face questioning on the vaccine rollout by the European Parliament next week, and the Commission is due to explain itself before EU ambassadors on Wednesday.

The European Medicines Agency has moved more slowly than authorities elsewhere, which adopted emergency approval procedures, causing delays of up to four weeks for vaccines to be given the green-light.

To date, the European Commission has placed orders for 2.3 billion doses from six different manufacturers.