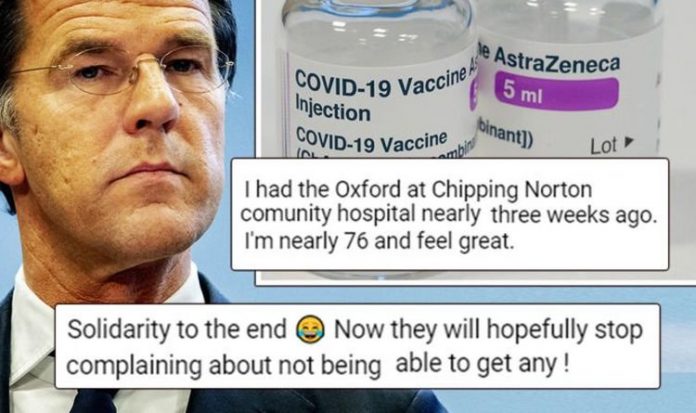 A number of European countries including Germany and France have decided they won’t use the vaccine, produced by a British-Swedish company, for older age groups. This is despite the European Medical Agency approving its use for all age categories.

However the Gezondheidsraad did say the vaccine can be given to those aged 60-64 as well as younger age groups.

For those aged 60-64 it said the jab is “effective, sufficiently safe and acceptable”.

The health council added: “It triggers an immune response in older people that is comparable to people aged 18-55.”

Both the British Government and AstraZeneca have insisted the jab is safe and effective for all age groups.

The Dutch regulators decision drew a furious response from a number of Express.co.uk readers who noted just last week the EU was demanding extra doses of the vaccine from the UK.

One commented: “Solidarity to the end!

“Now they will hopefully stop complaining about not being able to get any!”

Another added: “So after all that fuss they don’t need any AZ vaccine then, this lot are unbelievable.

Last week the EU caused fury when it threatened to block vaccine exports out of the bloc and impose a hard-border between Ireland and Northern Ireland.

This was done after AstraZeneca announced a dramatic cut in the number of vaccines it would deliver this spring due to production problems in a Belgium factory.

In response Brussels demanded AstraZeneca vaccines produced in the UK be diverted to the EU.

The border threat caused outrage in London, Dublin and Belfast and was swiftly abandoned.

The EU was also condemned by the World Health Organisation which warned export bans could lead to “vaccine nationalism”.

Other Express.co.uk readers shared similar sentiments with one stating: “This continues to be orchestrated by the EU to divert from their utter incompetence in dealing with the vaccine roll out.

“The EU citizens see through this feeble ploy. Buy British.”

Another said: “The Oxford AZ jab is currently in pole position to be the #1 choice for a global rollout. It seems the EU and their chums are desperate to trash the prospects of little our third country saving the world after leaving their crooked club.”

Britain is far ahead of all EU member states in its vaccination programme, having administered more than 10 million jabs.

Globally only Israel and the United Arab Emirates have conducted more vaccinations per capita.