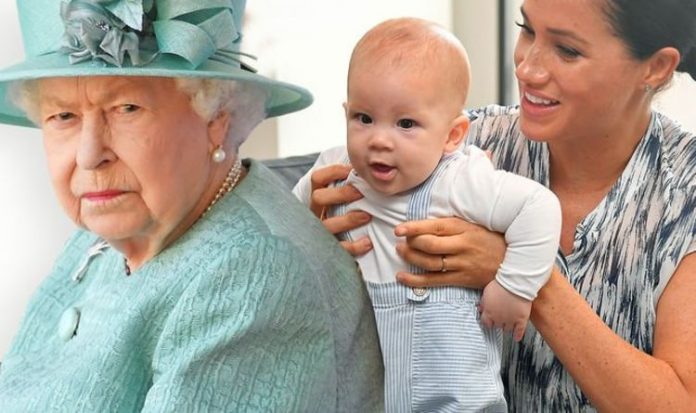 Meghan Markle’s choice of words has left royal officials frustrated, according to royal correspondents. Speaking on ITV’s Royal Rota, producer Lizzie Robinson remarked that the Duchess of Sussex’s fiery response to the Archie birth certificate row “did not go down entirely brilliantly” within the royal ranks. This comes after a furore erupted last week over a change to Meghan Markle’s name on her son Archie’s birth certificate was exposed.

It emerged last week that the Duchess’ name ‘Rachel Meghan’ was removed from Archie’s birth certificate in June 2019.

The name was replaced with ‘Her Royal Highness the Duchess of Sussex’.

The Duke and Duchess responded to speculation behind the changes, as a spokesman for the couple said: “The change of name on public documents in 2019 was dictated by The Palace, as confirmed by documents from senior Palace officials.

The spokesman also blasted “the carnival of so-called experts” who commented on the story.

ITV News Royal Editor Chris Ship reacted: “Wow, a very strong statement. A statement you would not have got if they were in the Royal Family.

“This is part of their war with the tabloid media. If they feel offended they will say something.”

Ms Robinson responded: “I’m not sure it’s gone down entirely brilliantly – the word ‘dictated’ – by the Palace.”

The Palace refused to officially comment but a Buckingham Palace source told the MailOnline that it was Prince Harry and Meghan’s own aides at Kensington Palace who made the changes – and insisted it had nothing to do with the Queen or her staff.

READ  Brexit part of the reason we did not sign anyone, Tottenham boss Pochettino says - UK

They said: “The certificate was changed by the former office of the Duke and Duchess of Sussex.

“It was changed to ensure consistency of the name and title of the Duchess with other private documents.”

Another source told The Telegraph that the Sussexes’ American media team had made a mistake and suggested something had been “lost in translation”.

The unnamed insider said the use of the word “dictated” was unfortunate.