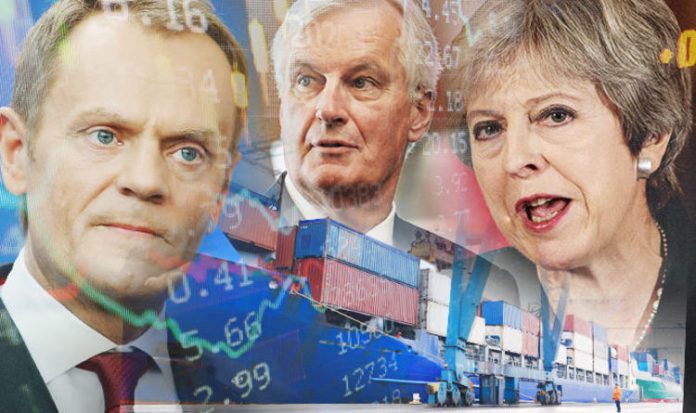 Experts said the stance being taken by Brussels was an example of how negotiations led by Michel Barnier were determined to cut their nose off to spite their face.

Economists and MPs lined up to lambast the childish approach to talks which have reached deadlock.

Latest figures show the UK had an overall trade deficit of £67billion with the EU in 2017.

British exports to the EU totalled £274billion last year while the UK imported goods worth £341billion.

Dover MP Charlie Elphicke said: “European leaders have been insulting our country and acting like they can hold us to ransom.

“Yet the truth is, they stand to lose far more from no deal than we do. Tariffs would hit them twice as hard.

“The past few days have been stark reminder of why we voted to leave in the first place.

“It’s time to believe in Britain and the bright future we have outside the EU.”

Analysts think Brussels’ dismissal of Prime Minister Theresa May’s search for compromise at the informal meeting of EU bosses Salzburg would have sparked panic among German carmakers and French wine and cheese producers who rely on the British export market.

Britain relies on the EU for a raft of goods, most notably cars.

Analysis shows the UK imported more than £30billion worth of cars from EU countries in 2016.

In addition more than £800 a year is spent by each home on food imported from the EU with meat and fish worth £200, fruits and vegetables valued at £100 and cereal, pasta and bread worth £100.

Overall, the average UK household purchased goods imported from the EU worth more than £3,000 last year.

If no trade deal is reached by the time the UK leaves in March, imported goods will likely be subject to tariffs.

Economists For Free Trade (EFT) calculated the complete breakdown of Brexit talks, or a no deal scenario, would equate to a £651billion gain for the UK.

They say paying no divorce bill, or financial settlement, would be an effective gain of £39billion. Also, with no transition period, other Brexit gains of free trade, self regulation and own border control would come two years earlier.

EFT chairman Patrick Minford said: “So a £651billion gain for the UK versus a £507billion loss for the EU – it could not be more open and shut who should least want a breakdown. For the UK a breakdown would be a short-term nuisance but a substantial economic gain.

For the EU it is both a short-term nuisance and a substantial economic loss.”

Tory MP Philip Davies said: “The key thing is the EU has totally overplayed its hand.

“There is such a massive trade deficit so German car manufacturers and French wine and cheese producers are the people who are going to live to regret it. I am a free market individual and I don’t believe in protectionism, but I am all for people buying British, I would encourage people to buy British.”

They cited IMF statistics that revealed 15 of the 22 largest exporters to the EU trade under WTO rules and increased their EU exports by 135 per cent between 1993 and 2015.

Former Cabinet minister and leading Tory Brexiteer Priti Patel said: “Outside the EU Britain can prosper from being in control of our own trade deals.

“There are new opportunities ahead of us to further our volume of global trade with emerging and developing markets across the world.

“Being wedded to the EU holds us back and stops us from benefiting from the lower prices, new jobs and increased economic growth that more free trade generates.”

She added: “Anyone who thinks that Britain cannot stand on our two feet in the world is seriously mistaken.

“Our proportion of trade with the rest of the EU is declining and our biggest trading partner is the US.

Inward investment into the UK is strong and we are seeing businesses set up bases and expand in this country.

“The Government needs to put in place reforms to tax and regulation and ensure there is new investment in key infrastructure to make Britain a more attractive destination for foreign investors.”