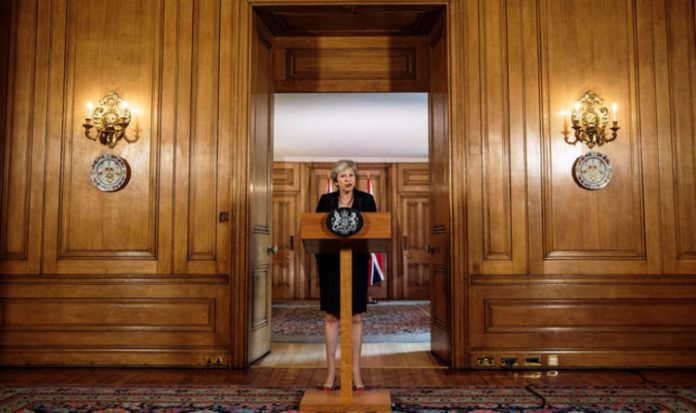 She singled out eurocrat Donald Tusk for delivering an unacceptable eleventh hour stark rejection of her Chequers deal proposals at this week’s informal EU summit in Austria.

She dramatically stepped up her insistence that she would rather leave the bloc without a deal than accept its current terms, and she said it was up to the EU now to break the talks stalemate.

“No-one wants a good deal more than me, but the European Union should be clear – I will not overturn the result of the referendum, nor will I break up my country,” she declared.

“We need serious engagement on resolving the two big problems in the negotiations.  We stand ready.”

Her declaration won some praise from key eurosceptics at home after a day of damaging headlines about the ambush she suffered in Salzburg at the hands of fellow EU leaders who she had expected to welcome her plans.

She will hope it buys her time to head off a serious revolt at the forthcoming Conservative party conference.

But she has disappointed many eurosceptics by clinging to the Chequers plan they think ties Britain too closely to the EU after Brexit, and which Brussels has largely rejected.

In a deliberate bid to speak to the public directly after a day of damaging headlines, a soberly-dressed Mrs May delivered her prepared statement direct to camera at a lectern in Number 10’s State Dining Room, with two Union flags displayed behind her.

She admitted talks with Brussels had reached “an impasse”,  six months before Britain is due to leave next March 29.

But the ball was in the EU’s court to put forward fresh ideas on the Northern Ireland border and trade.

In a stark illustration of how she was prepared to leave the bloc without a deal if necessary, she announced for the first time that in this event, Britain will unilaterally protect the rights of the three million EU citizens now living here.

Sounding emotional, she said she understood they would be worried after Salzburg about their futures and she assured them: “You are our friends, our neighbours, our colleagues. We want you to stay.”

She also promised the people of Northern Ireland “that in the event of a no deal, we will do everything in our power to prevent a return to a hard border” with Ireland.

The border issue has become a major sticking point and Mrs May said the EU’s proposals were unacceptable.

Brussels had come up with just two ideas about future UK-EU economic relations, she noted.

One would make Britain obey all EU rules, accept uncontrolled immigration from the Continent and stop us making trade deals with other countries.

But she added: ”That would make a mockery of the referendum we had two years ago.”

The EU’s second option envisaged keeping Northern Ireland in the customs union, effectively separating it economically from the rest of the UK.

That had been rejected by Parliament, would not respect the integrity of the UK – and could never be agreed by a British PM:  “If the EU believe I will, they are making a fundamental mistake.

“Anything which fails to respect the referendum or which effectively divides our country in two would be a bad deal and I have always said no deal is better than a bad deal,” she declared.

She said the best outcome would be for the UK to leave with a deal, which was why she had proposed a third option, based on frictionless trade in goods.

But on Thursday, EU Council president Donald Tusk had said this would undermine the EU single market: “He didn’t explain how in any detail or make any counter-proposal.  So we are at an impasse.”

She complained: “Throughout this process, I have treated the EU with nothing but respect. The UK expects the same. A good relationship at the end of this process depends on it.

“At this late stage in the negotiations, it is not acceptable to simply reject the other side’s proposals without a detailed explanation and counter proposals.

“So we now need to hear from the EU what the real issues are and what their alternative is so that we can discuss them.

“Until we do, we cannot make progress. In the meantime, we must and will continue the work of preparing ourselves for no deal.”

Mrs May’s comments could be partly a sign that she is smarting over Mr Tusk’s mocking Instagram photo, showing him offering her a cake with the caption “Sorry, no cherries” – a reference to the EU’s claim that Britain is trying to “cherry pick” the best bits of membership. UK sources also suggest his public denunciation of the Chequers plan was harsher than he had been in their private meeting.

But she was wrong to persevere with the Chequers proposals, which would neither deliver a proper Brexit nor satisfy the EU, he said.

Referring to the “divorce payment” Britain has promised Brussels as part of an exit deal, Mr Rees-Mogg said: “The Prime Minister has shown steely resolve at the eleventh hour and is standing up to the EU bullies. The next step is to say to the EU £40 billion and free trade or World Trade terms.”

Pro-Brexit Aid Secretary Penny Mordaunt tweeted: “Speaking to constituents today, it is clear that EU’s behaviour in recent days is increasing support for us leaving the EU.

“People still want a deal but content to go without one, even folk who voted remain.”

Fellow Brexiteer Andrea Leadsom, the Commons Leader, tweeted: “The Prime Minister has negotiated in good faith – respecting the result of the referendum to leave the EU, and keeping the country united. She stands ready, and I stand with her.”

Democratic Unionist Party leader Arlene Foster, whose party has a deal to support Mrs May’s minority government in key Commons votes, said: “The Prime Minister is right to stand firm in the face of disrespectful, intransigent and disgraceful behaviour by the EU. The United Kingdom will not be treated in such a manner.”

Brussels officials rejected UK media portrayals of the Salzburg summit and said it was Mrs May who had been tough and uncompromising.

One said: “The EU Commission is, and will continue, working constructively.”

Meanwhile Mr Tusk insisted in a statement that the EU and its leaders “fully respect” the UK’s referendum result, and had studied the Chequers plan “in all seriousness”  – making their concerns known to the British side “in every detail for many weeks”.

He went on that “out of respect for the efforts of PM May”, the EU had decided to treat her plan as a “step in the right direction” – and he stressed that in Salzburg he had said parts of it were a “positive evolution” in Britain’s approach.

“The UK stance presented just before and during the Salzburg meeting was surprisingly tough and in fact uncompromising,” he went on.

“While understanding the logic of the negotiations, I remain convinced that a compromise, good for all, is still possible. I say these words as a close friend of the UK and a true admirer of PM May.”

Shadow Brexit Secretary Sir Keir Starmer added: “The Prime Minister’s negotiating strategy is collapsing around her and that’s why we’re in this impasse and the country is staring down the barrel of no deal.”