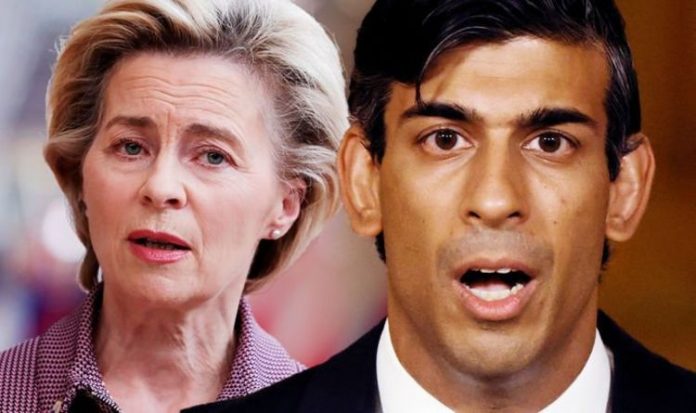 Negotiations on a future trade relationship between the EU and UK are still deadlocked – despite a ticking clock and a further bid by the European Commission to restart collapsed talks. The UK rejected Brussels’ proposals for further discussions in London this week after Prime Minister Boris Johnson accused the EU of being too harsh and urged for a “fundamental change in approach”. The bloc’s chief Brexit negotiator Michel Barnier and his British counterpart David Frost spoke on the telephone for the second day on Tuesday, trying to patch up the situation – but to no avail.

Mr Barnier said his message during the call was that “we should be making the most out of the little time left”, adding that the EU “door remains open”.

Downing Street had been angered by a statement from EU leaders issued last week, which said that the UK would have to be the one making concessions if a deal was to be agreed.

Sticking points in the talks include the so-called “level-playing field” – to ensure businesses on one side do not have an unfair advantage over the other – and fishing rules.

As the chances of a no deal Brexit at the end of the transition period increase, a 2016 column by Rishi Sunak has resurfaced, in which he sheds light on the EU’s “dismal” record on opening up new trade markets.

Campaigning for Britain to leave the bloc before the EU referendum, Mr Sunak wrote: “Appearing on lists alongside Andorra, Turkey and San Marino is not generally something Britain aspires to.

“And yet, if Britain remains inside the customs union from outside the EU, that’s exactly the club we would join. There is much scaremongering about leaving the customs union, but staying in post-Brexit would be a mistake and there are six simple reasons why.

“The EU has a dismal record on opening up new trade markets for its members. It took Brussels 58 years to sign a Free Trade Agreement (FTA) with a top ten economy, Canada, and even this was almost derailed by a tiny Belgian province.”

For example, Switzerland has signed FTAs with eight of Britain’s largest ten trading partners while the EU has only managed to strike deals with two.

Canada has covered 90 percent of its exports with FTAs, considerably more than the EU achieved for Britain.

The Conservative MP for Richmond added: “The EU clearly has the wrong set of trade priorities. Reversing these failures is one Brexit’s biggest prizes. Outside the custom union, Britain can regain control over its trade policy and use it to turbo charge growth.

“The EU’s protectionist trade policy slaps big tariffs on everyday products to prevent European producers from being undercut, resulting in higher prices for consumers. Outside the customs union, Britain can cut import tariffs on goods we don’t produce at home and that are cheaper to import from outside the EU.

“Imported oranges, for example, are taxed at 16 percent to ensure Europeans buy Spanish rather than cheaper alternatives from Egypt. Bicycles meanwhile, which in Britain are largely imported from Asia, are taxed at 15 percent to protect Italian producers. Outside the customs union, shoppers could buy the cheapest products available, saving us all real money.”

He also noted that any tariffs incurred after leaving the customs union would be manageable.

He explained: “Cheaper oranges are all very well, but what about the tariffs we’d face outside the customs union? Luckily, there is no need to speculate. As members of the World Trade Organisation, we know that the total tariff bill facing British companies if no trade deal is secured with the EU would be £5billion a year.

“But the UK will be saving at least its net annual contribution to the EU budget of around £9billion and also in the same scenario EU firms will be paying the UK £13billion a year in tariffs. So in context, tariff costs can easily be offset with funds raised elsewhere.”

Mr Sunak concluded for his piece on ConservativeHome: “Britain is the world’s fifth largest economy, NATO’s second largest military power, and the world’s leading financial centre. have we really lost such confidence that we would rather be a second class member of the European Union than strike out to be one of the first-class nations of the world? If the answer is no, the customs union can only hold us back. Let’s cut it loose before it does.”