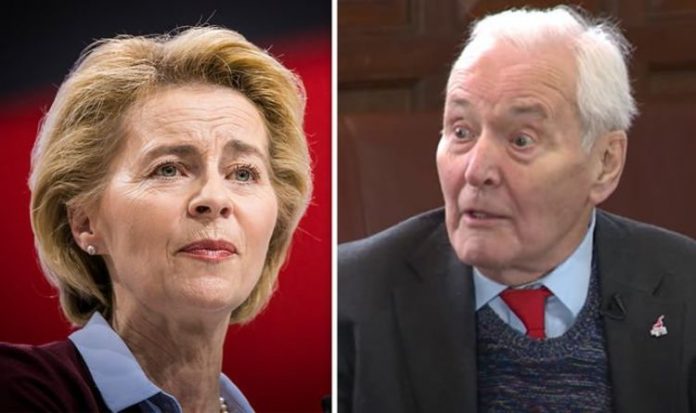 Mr Benn spent much of his political life campaigning against Britain’s membership of the EU and its precursor, the EEC. It is a tragic irony that his life’s calling was not achieved until after his death in 2014 ‒ but that is not to say his views are irrelevant today. As the Brexit debate rumbles on, Leavers and Remainers alike would be wise to take note of Mr Benn’s claim that unelected Brussels bureaucrats are on an “empire-building” mission.

Speaking to the Oxford Union just one year before his death, he said: “Well my view on Europe is very simple.

“We had this bloody war which cost millions of lives and then we had to decide how we reacted to Europe.

“And I took the view that having fought them we should now work with them. That was my first thought about it.

“Then when I saw how the European Union was developing it was obvious that what they had in mind was not democratic.

“I mean, in Britain you vote for a Government and therefore the Government has to listen to you and if you don’t like it you can change it.

“But in Europe all the key positions are appointed, not elected.

“The Commission, for example, all appointed. Not one of them elected.”

Mr Benn concluded that not only is the institution fundamentally anti-democratic but that it also has a sinister agenda at its heart.

He added: “The way Europe has developed is that bankers and the multinational corporations have got very powerful positions.

“If you come in on their terms they will tell you what you can and cannot do. That is unacceptable.

“My view of the European Union has always been not that I’m hostile to foreigners but that I’m in favour of democracy.

“Out of this story we have to find an answer because I certainly don’t want to live in hostility to the European Union.

“I think they are building an empire and want us to be part of that empire, and I don’t want that.”

After Britain joined the bloc in 1973, under the leadership of Tory Prime Minister Edward Heath, Mr Benn devoted much of his political life to pulling the UK out of Brussels.

No referendum was called on Britain joining what was then the EEC ‒ the European Economic Community ‒ but Labour won the 1974 general election on the promise that Harold Wilson would call a plebiscite.

He did so, and Mr Benn led the No campaign.

During a debate with fellow Labour MP Roy Jenkins before the referendum, Mr Benn argued that the Common Agricultural Policy (CAP) was designed to favour France and harm Britain.

Brexit: Five steps that led to the UK’s withdrawal from the EU (Image: DX)

Lifelong Labour supporter and donor John Mills also recalled in an exclusive interview with Express.co.uk how, when Britain joined the EEC, the price of butter skyrocketed.

He said: “I do remember the price of butter quadrupling after joining the EU.

“I was against the bloc because food prices were going up at a worrying level.

“There were butter mountains, there were wine mountains…”

Tony Benn is an icon of the Labour Party (Image: GETTY)

The eurosceptic added: “The perception that the EU is wasteful and that the money is spent on the wrong things… well, that is what convinced people to vote the way they did in 2016.”

Mr Mills’ ‘No campaign’ warned that “the price of butter would have almost doubled by 1978” if Britain did not leave.

It claimed that the EEC, through the Common Agricultural Policy, forced Britain to buy food from other member states and banned the import of cheap butter from New Zealand.

Although the debate continued about whether the EEC was entirely to blame for that, Britain voted to stay and a BBC report confirmed that the price of butter did not just double, but had in fact quadrupled by 1978.