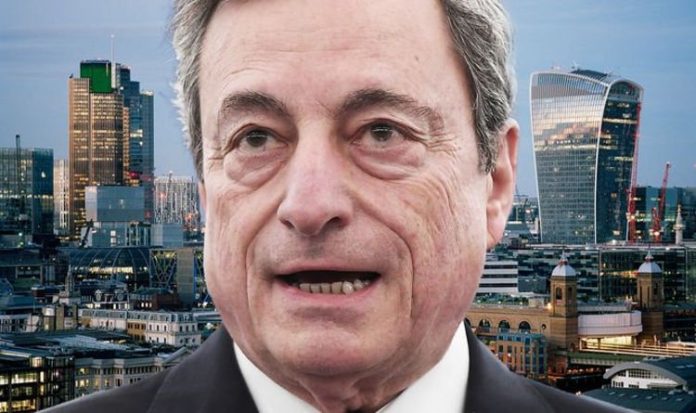 Bank of England Governor Andrew Bailey has warned the European Union against mounting a raid on the City of London, saying the “Old Lady” will “resist very firmly” any attempt by Brussels to force financial trading worth trillions of pounds to relocate after Brexit. Amid mounting speculation EU officials could force more financial business moves within its borders, Mr Bailey said steps forcing the relocation of euro derivatives, otherwise known as financial instruments, would represent a “serious escalation”. The EU granted the City of London temporary equivalence for derivatives clearing, enabling the activity to continue after the end of the Brexit transition.

The UK had hoped to obtain full equivalence from Brussels for clearing and other financial activities and is in talks to produce a post-Brexit memorandum of understanding, due next month.

However, Mr Bailey said that the recent attitude of the EU suggested that equivalence was a “sideshow” and the bloc’s real agenda seemed to be a “location policy” of shepherding as much lucrative financial services activity out of London, and into the bloc as soon as possible.

It is not the first time Britain finds itself on a collision course with Brussels over financial services.

While the UK was still a member of the EU, the City of London had to fight tooth and nail to protect itself.

In 2011, then-Prime Minister David Cameron’s coalition Government even successfully launched legal action against the European Central Bank (ECB), which at the time was headed by now-Italian Prime Minister Mario Draghi.

An ECB policy paper wanted to see clearing houses based in the eurozone if they handled more than five percent of the market in a euro-denominated financial product.

But Britain asked the courts to strike down the rule on the grounds it would have restricted the free movement of capital and infringed on the right to establish cross-border businesses across a multi-currency European Union.

If the policy went ahead, it would have undermined London’s financial market infrastructure – as it would have required that clearing houses shifted many of their operations to the eurozone, most likely Frankfurt or Paris.

A Treasury spokesperson said at the time: “This decision contravenes European law and fundamental single market principles by preventing the clearing of some financial products outside the Euro area.

“That is why we have begun proceedings against the ECB through the European Court of Justice.”

On the other hand the ECB argued that in the interests of financial stability, it was necessary to locate financial market infrastructure in the eurozone so that crises were not handled by multiple central banks with conflicting interests.

Its policy stated: “As a matter of principle, infrastructures that settle euro-denominated payment transactions should settle these transactions in central bank money and be legally incorporated in the euro area.”

Britain ended up emerging as the winner four years later.

The Luxembourg-based court said in its ruling in 2015: “The ECB lacks the competence necessary to regulate the activity of securities clearing systems as its competence is limited to payment systems alone.”

JUST IN: Le Pen’s vision for a ‘reformed Europe’ explained by top adviser

He has also been tipped to change the future of European politics.

Senior writer at Barron’s Group, Pierre Briançon, wrote on Twitter: “Draghi as Italian Prime Minister does not only change Italy, it could also upset the EU’s comfy balance of power, based for too long on the Franco-German duo.

“A third heavyweight around the leaders’ table.

“Macron and Merkel (and her successor) will have to deal with an influential voice, whose competence in economic and monetary matters dwarfs theirs (to say the least) and whose international aura and prestige at least equals their own.

“Should make for interesting intra-EU dynamics.”