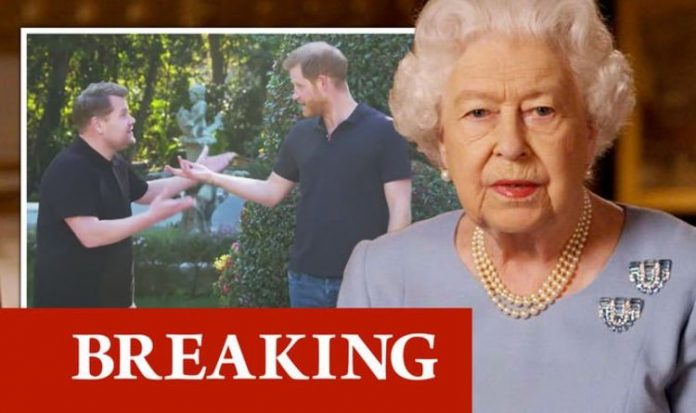 Palace sources branded “unhelpful” the timing of the Duke of Sussex’s first TV appearance after Megxit. According to insiders, the release of Prince Harry’s interview with his friend and TV host Mr Corden has created “disquiet” at Buckingham Palace.

One source made it clear there is a tacit agreement within the Royal Family when it comes to leaving the spotlight to the Queen.

They told the Daily Mail: “When the Queen speaks as she has done about the vaccine it is accepted that she has a clear field”.

Another openly criticised the “lack of coordination” which has led Harry’s interview to overlap with the monarch’s plea to Britons over getting a vaccination against COVID-19.

They said: “This blurring of the lines doesn’t help anyone.

“When the Queen speaks like this it is her message that should be heard without other distractions.

“This lack of coordination is unhelpful.”

Working royals coordinate their diaries to make sure one engagement isn’t overshadowed by the activity of another member of the Firm.

However, the Duke and Duchess of Sussex are no longer senior royals, which means they are not required to share their diary and plans with Buckingham Palace.

The episode of the Late Late Show With James Corden was released just hours after the Queen urged Britons not to be selfish and get a jab against COVID-19.

In a call with health officials, Her Majesty likened the extraordinary community spirit on display during the vaccination rollout to the war effort.

And she extraordinarily decided to open up on her private experience with the vaccine, saying it was not at all painful.