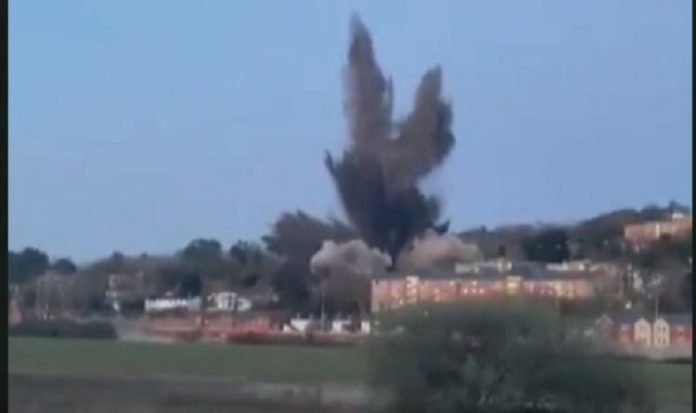 A WW2 bomb was discovered on a building site on Friday in Exeter. Royal Navy bomb disposal teams were sent to Glenthorne Road at 9am on Friday. The bomb was detonated in a controlled explosion following the evacuation of 2,600 residents in the area.

Video footage has begun circulating of the explosion as many people claimed that it could be heard from miles away.

The detonation resulted in a massive black cloud shooting into the sky.

Devon and Cornwall’s police said they had a 400-metre cordon and closure of nearby roads in effect before the explosion.

In a statement, they said: “Police hope this work will be completed by the end of today.

“But we will be guided by the bomb disposal team.

“Residents should be reassured that military, police and partners are working to maintain public safety.”

They also added: “Exemptions in Covid-19 social distancing rules exist for matters of public safety such as this.”

Following the explosion, the Devon and Cornwall police thanked residents for their cooperation.

They added: “The 400-metre cordon will remain in place tonight so residents must not return home.

“Anyone who has been evacuated and has any concerns can call the council helpline.”