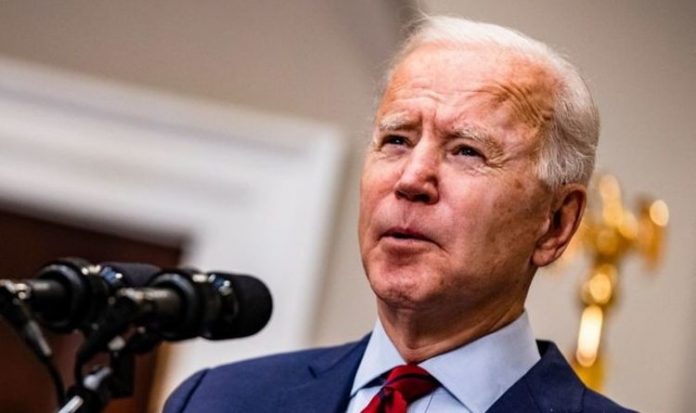 Katherine Tai, President Biden’s top trade nominee, slammed the brakes on the talks, pointing to a lot of “developments” since they began in 2018 and the priority of defeating the Covid-19 threat. She said there was a need to “review the discussions and the negotiations so far, in the light of all of these developments”.

But Washington’s new position, reported by Express.co.uk, sparked outrage in the UK with many critics questioning the so-called “Special Relationship” between Britain and the US.

One furious Express.co.uk reader said: “Tell them to stick their trade deal where the sun doesn’t shine!

“It’s not a trade deal! It’s a CON! We always end up giving more and receiving less and receiving inferior substandard goods. Plus being ripped off!”

Another said: “It’s high time to review our relationship with the US, no more lap dog attitude.

“It’s time for the UK to make its own decisions, special relationship has always been one way.”

Another reader said: “Ignore this man, the American economy is failing and he needs trade. He will be over-ruled by his government.”

Another said: “Why the need for a trade deal with USA? History proves they’re only concerned with protecting their own interests and as usual it’s their way or the highway.

And another said: “We all know that the world needs the UK much more than the UK needs the world.”

She also rejected a direct return to an 11-country Asia-Pacific free trade deal that originally included the US, saying the world had changed significantly since the Obama administration agreed to it in 2015.

Ms Tai also said she would prioritise enforcement of the US-Mexico-Canada trade agreement, which she helped renegotiate in 2019 as trade counsel for the House of Representatives Ways and Means Committee to include tougher labour and environmental standards.

The trade envoy said the deal marked an “important step in reforming our approach to trade” and that its success was vital.