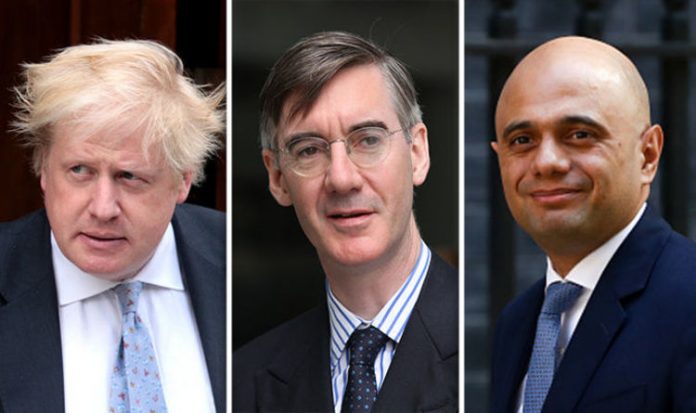 According to a monthly poll of 1,000 Tories by website ConservativeHome, Boris Johnson has re-emerged as a contender to succeed Mrs May.

Just a month ago before he resigned, Mr Johnson was backed by only eight percent of members.

But now Mr Johnson leads the poll and is ten points ahead of his nearest rival, Home Secretary Sajid Javid.

Environment Secretary Michael Gove’s support has fallen to seven percent following his failure to quit over the Chequers Brexit plan.

MP for North East Somerset Jacob Rees-Mogg came third with 13 percent, which is a slight fall from 14 percent in the previous month.

Under Conservative Party rules, MPs get to choose the final two candidates for a head-to-head contest which is decided by Tory members.

Writing in the Spectator magazine, Mr Johnson likened the plan to stay closely aligned to Brussels, with a “common rulebook” for trade in goods, to leaving a job for pastures new but still having to take orders from the old employer.

“That is what the Chequers white paper means,” he wrote, in his first public comment about Brexit since last week’s resignation speeches in the House of Commons.

“It is vassalage … colony status for the UK.

It was revealed this week that Theresa May’s local party chairman wants her to be tougher with the EU.

Maidenhead Tory party chief Richard Kellaway was one of seven association chiefs in constituencies held by Cabinet ministers said to be either demanding she gives no more ground to Brussels, or they oppose outright her white paper.

Mr Kellaway said he backed Mrs May and that a Downing Street briefing about the White Paper “went down very well” and had “cheered him up”.

But the local councillor added: “I think we have reached the stage that if we don’t get a deal around these terms, then we’ll have to break away.

“If it were to be diluted it would ultimately not be acceptable.”