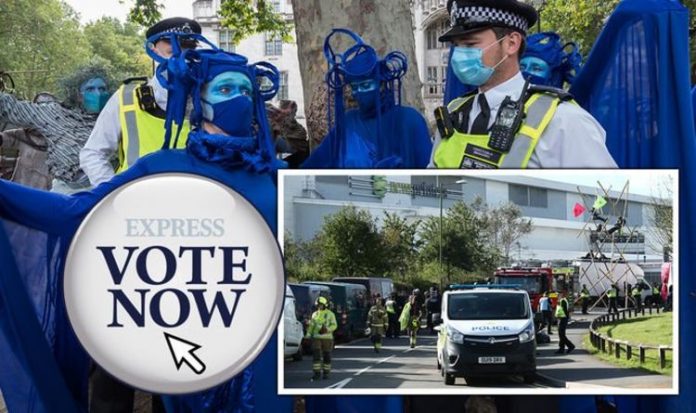 Express.co.uk readers can vote in our poll on whether they back tougher sentences for Extinction Rebellion activists who cause mayhem. It comes as Home Secretary Priti Patel is looking at cracking down on the group, which has brought the capital to a standstill in previous protests.

The review could lead to Extinction Rebellion being treated as an organised crime group, which could leave environmental activists who cause chaos facing five years in jail.

It comes after protesters were widely criticised for blocking the delivery of some of the UK’s major newspapers on Saturday.

Writing in the Daily Mail, Ms Patel said: “While Extinction Rebellion claim to be an environmental rights campaign group, their actions speak louder than their words, and their continued guerrilla tactics show that they do not believe in peaceful protest – but instead seek to undermine and cause damage to our society, disrupting the hard working individuals who are trying to keep this country moving forwards.”

The source said: “We want to see some people banged up instead of escaping with a fine they can pay from their trust fund.”

More than 100 demonstrators used vehicles and bamboo lock-ons to block roads outside the printing works on Friday evening, with both protests continuing until Saturday afternoon.

He tweeted: “A free press is vital in holding the government and other powerful institutions to account on issues critical for the future of our country, including the fight against climate change.

“It is completely unacceptable to seek to limit the public’s access to news in this way.”

Culture Secretary Oliver Dowden added: “We must never take our free press for granted, and those who disrupt our access to it damage our democracy.

“I condemn the idiotic actions of Extinction Rebellion.”

“People have the right to read the newspapers they want.

“Stopping them from being distributed and printers from doing their jobs is wrong.”