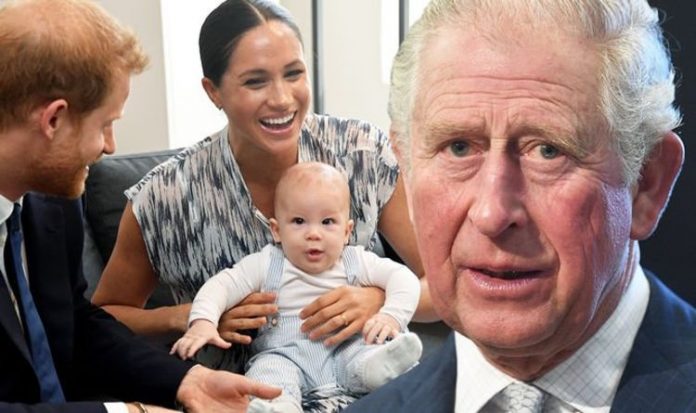 Archie Harrison Mountbatten-Windsor, one, is seventh in line to the throne. However, Meghan Markle, 39, and Prince Harry, 35, decided against giving their son a royal title choosing to raise him as a private citizen instead. Despite the doting parents’ wishes to raise their son outside the royal bubble, he is fated to become a prince unless there is a royal law change.

Constitutional expert Iain MacMarthanne explained that Archie will automatically become a prince when his grandfather Prince Charles ascends the throne.

The expert told Express.co.uk: “In the case of Archie things change on the death of the Queen.

“At that moment, by law, Archie will become – whether he choses to be or not – HRH Prince Archie of Sussex for life.

“At his death, the HRH dies too, he can pass on to any male heir the title Duke of Sussex, but not HRH or Prince.

According to the book Meghan and Harry “were worried” about Archie automatically becoming a Prince when Charles is King and voiced their concerns.

Mr Scobie and Ms Durand write: “A source said the couple were worried about the day Prince Charles becomes King and Harry’s children could inherit the titles of Prince or Princesses.

“They shared their concerns with Charles, who said he would consider when he became King issuing a new letters patent, a legal instrument in the form of a written order issued by a reigning monarch, that would change this style.

“‘To not have a senior role in the royal family but have a title’, a senior aide close to the couple said at the time, ‘is just a burden.'”

Mr MacMarthanne explained how this piece of legislation is likely to affect Archie and his royal cousins, Prince George, Princess Charlotte and Prince Louis.

Mr MacMarthanne said: “The 2013 Act sought to bring multiple pieces of outdated and discriminatory legislation relating to the monarchy up to date, and through this Act male primogeniture was abolished, allowing the firstborn child irrespective of gender to become heir apparent.

“The disqualification from inheriting the throne by marrying a Catholic was removed; and the Royal Marriages Act of 1772 was repealed, resulting in only the first six in line to the throne being required to obtain the sovereign’s permission.

“Consequently, should the children of the Duke and Duchess of Cambridge wish to marry, they will be required to seek the sovereign’s permission.