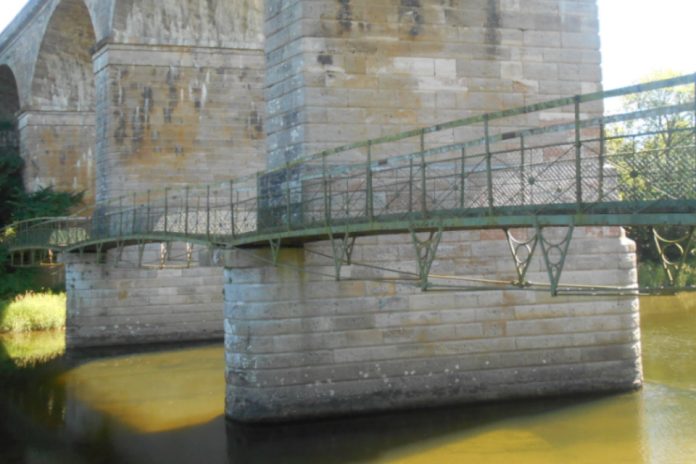 The suspended footbridge which hangs proudly over the River Teviot on the north side of the 19th century Roxburgh Viaduct – often referred to as the Teviot Viaduct – is set to be refurbished by Highways England to improve its safety.

Built by the North British Railway in 1850, the distinctively curving 13-arch viaduct is among the 3,000+ former railway structures maintained by Highways England Historical Railways Estate (HRE) on behalf of owners, the Department for Transport.

The footbridge is a key part of a popular and circular walking route along the Border Abbeys Pedestrian Way, close to the villages of Roxburgh and Heiton, near Kelso.

The suspended pedestrian bridge has been impacted from flooding as well as suffering with general decay and corrosion.

It is therefore necessary for the structure, which hangs along a picturesque location over the River Teviot, to be sensitively repaired to maintain public safety and for future generations to enjoy.

Refurbishment work on the footbridge will see the spans lifted and taken to a specialist workshop for repair and refurbishment. Some elements may be replaced depending on corrosion severity.

New timbers will also be installed across the deck and once repairs have been completed, the footbridge will be reinstalled from the deck of the listed viaduct.

An environmental management plan will be in place for the duration of the work to ensure the protection of the River Teviot and its ecosystem.

Work starts on Thursday 29 October and will require the closure of the footbridge until Spring 2021.