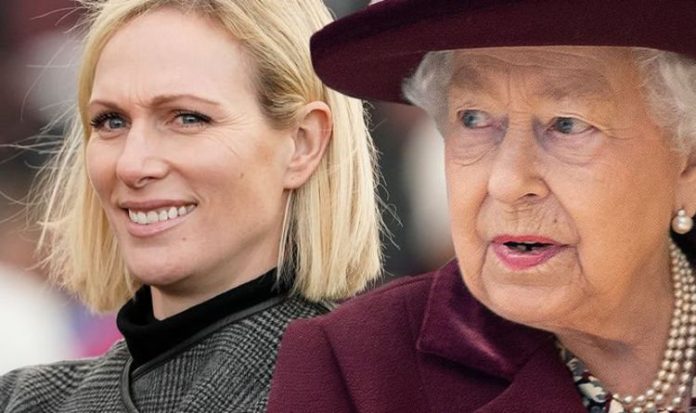 Zara is the second child of Princess Anne and Mark Phillips, and the granddaughter of the Queen. What makes Zara and her brother Peter stand out from the rest of the Royal Family is their lack of titles. On having Zara and Peter, Anne and Mark decided it would be better for their children to grow up without the baggage that comes with a royal title.

Thus, although cousins with some of the most well-known royal faces around the globe – Princes William and Harry – Zara and Peter have enjoyed relative obscurity throughout their lives.

This all while having the privileges of royal life.

Zara revealed the extent to which not having a royal title had helped her live a comparatively “normal” life during an interview with 1 News, appearing to snub the Queen in the act of describing life without royal responsibility.

When asked what it was like to be her, Zara said: “Me and my brother both had a great life growing up because we didn’t have our titles.”

Royal: Zara appeared to snub the Queen when talking about how ‘great’ life was without a title (Image: GETTY)

Zara Tindall: The royal has lived in near obscurity as a result of not having a title (Image: GETTY)

Not having a title while most of your family does must, many have speculated, mean a lot to the royal.

Yet, as Zara explained: “I think my life’s just more normal – a more normal way of growing up.

“We’re lucky that we’ve got some great friends all over the world.

“We’ve been able to travel and fit in and be able to do normal things.

“Our parents are very much to thank for that.”

Yet, many would question how normal living as a royal could be.

In a bid to truly make claim to her “normal” life, Zara talked through the humdrum of her daily life during the 2015 interview.

“I just get up, train, do the horses.

“Also having Mia (her then one-year-old daughter), it’s great to be able to do them both so closely.

Not having a royal title has allowed Zara to live without the same scrutiny as has plagued William, Harry, Princess Eugenie and Beatrice to name a few.

Even if Zara had grown up as a Princess, a royal custom would still have exempted her from receiving a new title on her wedding day.

When William married in 2011, he became a Duke, with Kate Middleton becoming a Duchess.

However, while the sons and grandsons of the presiding monarch traditionally receive peerages, the same rule does not apply to female members of the Royal Family.

This quirk dates back to when princesses were nearly always married off into foreign royal families – essentially used as political playing pieces to secure ties with other European dynasties, assuming the titles of their new husbands when they married.

Meanwhile, Zara also adopted the name of her husband, “Tindall”, giving up her maiden name “Phillips”.

Princesses who marry non-royals are sometimes offered peerages for their husbands.