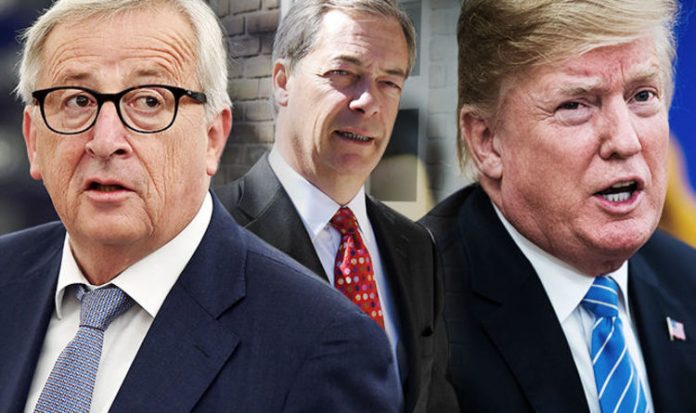 MEPs in Strasbourg backed plans for the European Investment Bank to do business in Iran, overcoming a Ukip attempt to block the planned investment in US-sanctioned Tehran.

Mr Farage, who leads the the Europe of Freedom and Direct Democracy group, which is home to the Ukip MEPs, said the European Commission’s plan risks souring relations with Washington further when they are at their worse over trade.

The EFDD’s blocking motion was with only 93 votes for, 573 against and 11 abstentions.

Mr Farage said: “It’s beyond comprehension that the European Union, including the British Government are prepared to open up lending again to Iran, especially as we know that their nuclear ambitions are far from over.

“The Trump Administration will take a very dim view of this.”

European People’s Party MEP Siegfried Muresan said: “We are granting the EIB the capacity to invest in Iran if suitable projects are found.”

The EIB, the EU’s Luxembourg-based, non-profit investment arm, on June 6 added Iran to a list of countries outside the bloc eligible for lending.

The Commission has also proposed that EU governments make direct money transfer to the Central Bank of Iran to avoid US penalties.

In May, Mr Trump pulled the US out of the Iranian nuclear deal, the Joint Comprehensive Plan of Action, and has since introduced sanctions in order to stop the global imports of Iranian oil.

Iran’s President Hassan Rouhani undertook a rare trip to Europe this week in order to lobby the Continent to stand strong against the US’s exit from the 2015 nuclear deal.

He also said Iran would not stand by idly in response to Mr Trump’s oil sanctions, insisting his government was ready to retaliate.

While in Switzerland, Mr Rouhani said: “The Americans have claimed they want to complete stop Iran’s oil exports. They don’t understand the meaning of this statement, because it has no meaning for Iranian oil not to be exported, while the region’s oil is exported.

“If you can do such a thing, do it and see the result.”

The Iranian leader hinted Tehran could blow the flow of oil in the Strait of Hormuz, a key passageway in the Gulf where one-fifth of the world’s oil passes through.