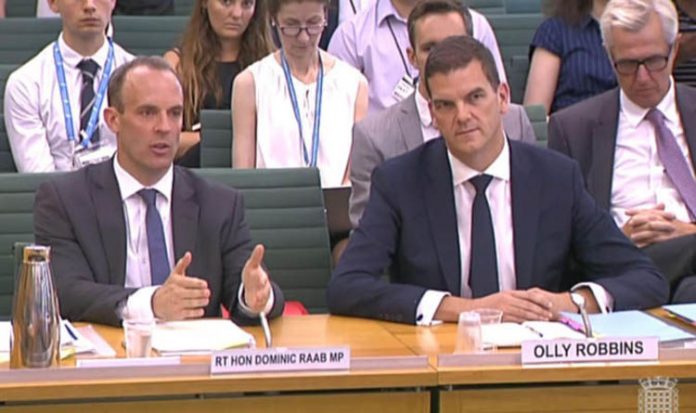 The proposal has been branded a “half in, half out” fudge, with critics saying it would pull off the strange trick of Britain losing all of the benefits of the EU while gaining none of the advantages of leaving.

Nigel Farage has made no secret of his loathing of the plan.

He yesterday branded it a “betrayal of what people voted for”, adding: “Theresa May doesn’t believe in Brexit.” One solace remained to its detractors – that EU mandarins would refuse to give an inch and that the plan was doomed to failure.

However, on the streets of the EU capital Brussels, the opposite mood has taken hold.

It might seem a bizarre statement in the week that it emerged Sabine Wayard, the European Commission’s deputy chief negotiator, said the idea that MI6 had been bugging secret Brexit meetings “could not be excluded”.

But there is growing optimism that compromises could be made by Brussels and that the Chequers proposal could actually bear fruit.

Although strangely quiet for the August recess not everyone in Brussels is on holiday.

A core of experts, their summer leave cancelled, spent much of this week thrashing out the intricacies of the deal.

And despite her domestic challenges, Theresa May is being viewed with more respect now.

In part it’s to do with Boris Johnson’s departure from the Cabinet.

But mostly it’s down to Commission insiders poring over the proposals and concluding “we can work with this”.

Secrecy remains – no one wants to lift the lid of the machinations in the city which famously saw Mr Farage clash with Jean-Claude Juncker in the aftermath of 2016’s historic vote. Few would give their names.

But for one Dutch diplomat, 18 months of anguished negotiations with the UK have evolved into something much more positive.

“We’re close,” he said. “The feeling is better now. Johnson has gone and May appears to be in a stronger position.

Now that we know what Britain is actually asking for, it’s easier anyway.

“The thing you have to remember is that the EU want a deal too. Of course, it’s not over yet. We can’t compromise on single market access. But personally, and this is a feeling that is shared by many, I’m sure we can find a deal that works.”


We will miss Britain. We used to count on the UK to support us with problems like Italy

He added: “We will miss Britain. We used to count on the UK to support us with problems like Italy.”

Brussels is keen to show its new consolatory face and it is ending the often combative bi-weekly press conferences which used to be held by David Davis when he was in town.

“They want to make things easier for Prime Minister May,” said a German source.

This was echoed by British counterparts. “I remember when, last November, we were asking ourselves whether we’d ever get through phase one,” said one British diplomat.

“Well, we did. And now there’s a genuine feeling that we’re getting somewhere. That’s due largely to a change of optics by the EU.”

A Conservative member of the UK delegation who supports the Chequers plan being pushed by Brexit Secretary Dominic Raab and civil servant Olly Robbins went further.

He said: “Look, we’re about 80 per cent there on the withdrawal agreement. All that’s left is European citizens’ rights and the Irish border question.

And we know that the EU is happy with where we are on citizens’ rights. The reason they’re not declaring this publicly is because they don’t want to show that the only stumbling block is Ireland.

“As far as our future relationship goes, we have another two years to thrash that out.

“Yes, the withdrawal agreement must contain a political declaration of our future relationship, but it’s non-binding and can be as little as two paragraphs.”

He added: “Chequers is being viewed as a game changer, in the way feelings are changing here.

“The trick is to let the words do the heavy lifting. As long as you call something the right thing often enough it will become acceptable.

After March we’ll be out of the EU and, for half the Brexiteers, it’s all they want.”

There are still long term challenges, he said, but we may be surprised by what Brussels pulls out of the hat.

This could even include compromise on the so-called “four freedoms” of the EU.

He added: “Being in the single market in all but name is still a problem for them. But there is scope for compromise which didn’t exist even two years ago.

“What they want is for us to remain in the single market and customs union.

The big problem with that, of course, is the EU’s four pillars, particularly freedom of movement. “But what we’re hearing is that there may be real compromise on this.”

When David Cameron tried to negotiate before the referendum, his efforts were met with resounding failure.

But things are different now, said the source.

“Then the feeling was that they didn’t believe we would leave and they objected to demands of compromise simply for the sake of British internal politics.

“But if the clock was turned back, knowing of the migration crisis to come, they would have done things differently.

“Migration is now Europe’s most pressing issue,” said the source.

“There have already been measures within Schengen with temporary border restrictions.

There are countries within the EU now demanding more power over border controls.

The world is a different place. Countries want more power. “Of course, anything offered to Britain would have to be offered EU-wide, but the appetite is there.

Whether it’s enough to console hard Brexiteers is a different matter.” Another source said: “Europe doesn’t want a no-deal.

Chief negotiator Barnier, who was appointed by Jean-Claude Juncker, is ambitious to move up. Some say he is looking to replace him as European Commission President.

That means securing a deal that pleases European business too.” An Ireland solution too may be easier than we think.

The source said: “The problem is that the solution must be something neither side really wants.

It’s the only way both sides can maintain leverage going forward. If we find a solution that is immediately palatable to the EU, they will have no incentive to negotiate our future relationship, “One solution being considered is to simply extend what’s already happening.

Northern Ireland is already full of exemptions – its agricultural and veterinary policies, for instance, differ hugely from the rest of the UK.

“Until recently there was a border in the Irish Sea over abortion.

The idea is not to call it anything new.” Mrs May will still have a fight on her hands with Jacob Rees-Mogg, Boris Johnson and now Nigel Farage all set against the deal.

But another UK delegation source last night revealed she is considering some rather nuclear trump cards.

“Jacob Rees-Mogg’s European Research Group know if they challenge May over the Irish border, they can defeat her in Parliament.

I understand she is considering her options here. One will be to threaten a general election.

And another – somewhat radical perhaps – is to propose a ‘choose it or lose it’ second referendum. “However much they don’t like the compromises, will they risk derailing Brexit altogether? Will they risk Corbyn?”