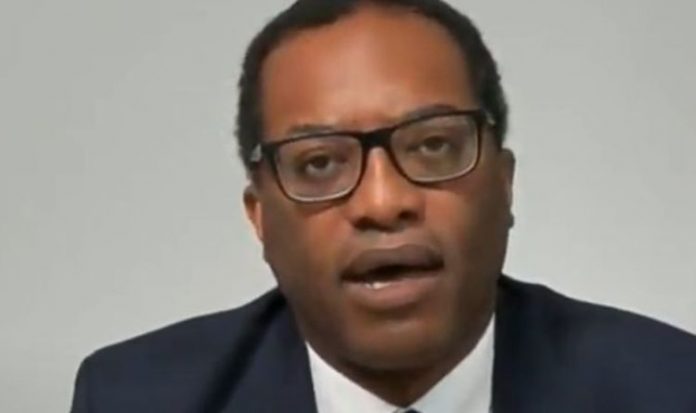 Kwasi Kwarteng appeared on Sky News to discuss the Government’s move to cut Yemen aid and defended the move despite fears it could be fatal for many. The decision was made due to COVID-19 and the impact it has had on the British economy. However, Kwasi Kwarteng faced a tense grilling after he was told that other countries and the UN are warning of a crisis for the war-torn nation which could be a “death-sentence” for many.

Speaking on Sky News, host Niall Paterson said to Mr Kwarteng: “As you say, there have been huge amounts of money spent since the beginning of this pandemic in terms of business support and for individuals.

“However, yesterday we learned that the Government in terms of its foreign aid budget, it’s not just halving, it’s cutting by 54 percent the amount of money we give to Yemen, why are we choosing this moment to do so?”

Mr Kwarteng replied: “I haven’t seen the numbers but the actual amount that we’re reducing is something like 0.7 percent of GDP to 0.5 percent.

“I think it was felt that given the incredible stress that we’ve gone through in Britain giving 0.7 percent of the economy in this particular year was challenging.

JUST IN: ‘Boris is a coward!’ Martin Daubney in scathing rant as he dismantles lockdown exit plan

“I think the amount has been reduced by little and after all the European average is only is 0.45 percent so we’re still giving more of our national wealth.”

Host Mr Paterson tried to interrupt with a stern Mr Kwarteng saying he was trying to answer his question to which the presenter pulled a face at.

Mr Kwarteng continued: “I think that this is a temporary measure, I think the Chancellor has said that we want to fulfil our commitments, and we are doing so.”

Mr Paterson added: “Yeah, it’s a temporary measure at a time when tens of millions of people in Yemen have threats of death from famine.

“And the Foreign Secretary telling the UN Security Council new UK aid will save lives by making sure the poorest Yemenis can feed their families.

“The UK cannot solve this crisis alone, other donors must know release their funding and contribute more support to prevent this becoming an even bigger tragedy… And then we announced we’re gonna cut it in half?”

The Business Secretary responded: “I think he would do that anyway and I think when you look at Yemen, and I’ve travelled in the Gulf a lot, there’s a lot more countries in the Gulf, Saudi Arabia and other countries who can support humanitarian crises in that region.”

The Sky News host fought back and said: “We’re talking about lives here. The UN Secretary-General and others are warning of a pending crisis in Yemen, and we’ve just cut the amount of money that we’re giving them by half?”

Mr Kwarteng then replied: “I think Britain has always been at the forefront of international aid responses and people in this country are extremely generous.

“The government has provided all sorts of financial support. And also diplomatic support to crises in the region, and will continue to do so.”

Yemen has been suffering from war since 2014 as the country’s infrastructure has collapsed.