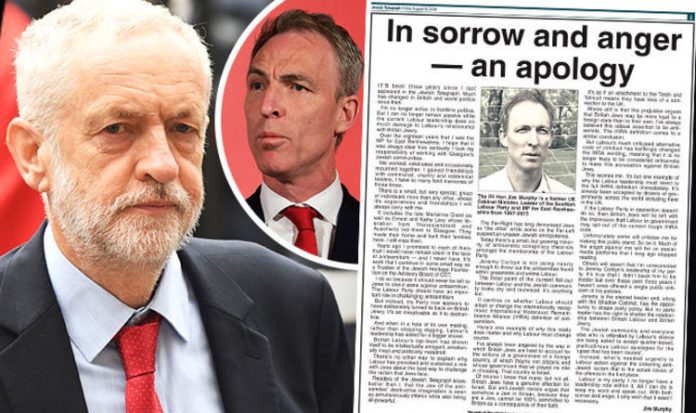 Jim Murphy, who led Scottish Labour between 2014 and 2015, took out page three of the Jewish Telegraph to say sorry to the religious community for Mr Corbyn’s lack of action.

The MP’s article appears under the damning headline ‘In sorrow and anger – an apology’.

Mr Murphy tweeted the page to his 34,000 followers with the caption: “I’ve paid for a full-page ad in this week’s Jewish Telegraph.

“It’s an apology to the Jewish community about the actions of the Labour Party’s leadership.”

He signed the tweet of with his initials JM.

The advert reads: “The Labour Party should have an important role in challenging anti-semitism.

“But instead, my party now appears to have deliberately turned its back on British Jewry.

“It’s as inexplicable as it is destructive.”

It adds: “And when in a hole of its own making, rather than stopping digging, Labour’s leadership has asked for a bigger shovel.”

The advert goes on to accuse Mr Corbyn and his team of being “intellectually arrogant, emotionally inept and politically maladroit”.

Labour has been embroiled in a row over anti-semitism for some time.

A cluster of scandals have taken place that has catapulted the party into the spotlight for all the wrong reasons.

It began when Mr Corbyn himself shared a platform with activists who compared Israel to the Nazis during a Holocaust Memorial Day event he hosted in 2010.

After, Labour MP Nassem Shah shared a Facebook post supporting the relocation of Israel to the United States and Ken Livingstone claimed Adolf Hitler “was supporting Zionism before he went mad and ended up killing six million Jews”.

The party recently adopted a new code of conduct in a bid to stomp out anti-semitism but critics have argued it does not go as far as guidelines in the International Holocaust Remembrance Alliance (IHRA).

The IHRA states that the following definition of anti-semitism should be recognised: “Antisemitism is a certain perception of Jews, which may be expressed as hatred toward Jews.

“Rhetorical and physical manifestations of antisemitism are directed toward Jewish or non-Jewish individuals and/or their property, toward Jewish community institutions and religious facilities.”

Labour’s code misses four of the 11 examples of anti-semitism which are internationally recognised as the definition.