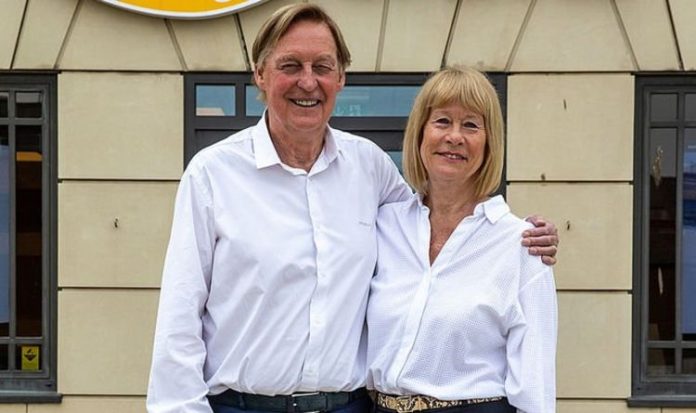 The businessman, who was 71, and his wife Irene ran Hays Travel, Britain’s largest independent agent. The couple were credited with saving thousands of jobs by rescuing ailing operation Thomas Cook when it went bust in October last year. John’s death, at his company’s Sunderland headquarters, came just three months after he was forced to axe 878 jobs in what he described as the “worst day we have ever had in our 40-year history”.

A statement issued by the company last night read: “John lost his life after collapsing doing the job he loved.

He built Hays Travel into the UK’s largest independent travel agent, providing jobs and careers for thousands of young people over 40 years.

“Throughout this past difficult year he did everything in his power to save jobs and protect the travel industry.

“He was held in immense respect by his staff, colleagues, family and friends.

“He was equally proud of his loyal staff who, under the direction of the board and senior management team, will ensure the business continues to serve our customers as he would have wanted.”

Dad-of-two John and Irene bought Thomas Cook in a £6million deal that saw 2,500 employees given jobs with Hays Travel. But fewer than six months later the Covid crisis decimated the travel industry.

It was a huge blow for John, who set up the business from scratch in 1980 from the back of his mother’s clothes shop in Seaham, County Durham.

He married Irene, who chairs the company, in 1997 and the couple paid themselves the minimum wage of £8.72 an hour.

In August they said: “We are devastated that after all of our efforts we now face losing some of our valued employees, through no fault of their own.”