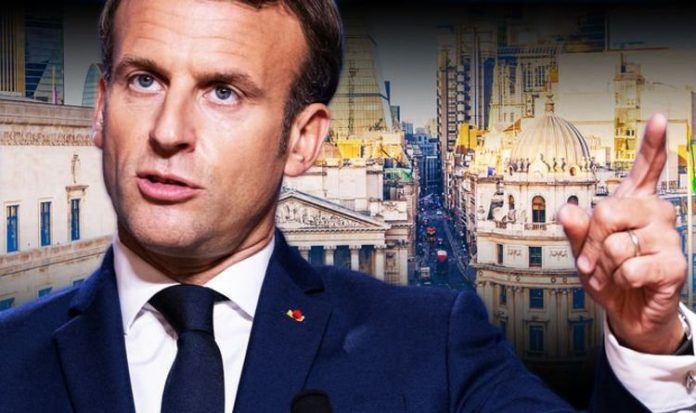 City of London banks have been warned that they need to move jobs and assets to the continent to continue trading post-Brexit. The European Central Bank (ECB) insisted on Wednesday that UK-based financial institutions must not use the coronavirus as an excuse to avoid relocation before the end of the transition period. The ECB, which supervises the eurozone’s biggest banks, said that lenders operating in the bloc must move sufficient capital, staff and management expertise to ensure the sort of physical presence required for prudent risk management.

The ECB said: “Banking supervision has provided flexibility where required, notably to account for impact of the lockdown measures and travel restrictions on the relocation of staff.

“No additional flexibility is foreseen in principle.”

It is no secret that the bloc’s main hubs, such as Frankfurt and Paris, had hoped Brexit would spell the end as London’s status as one of the world’s leading financial hubs.

After attending talks with various French authorities in 2017, former Foreign Office Minister Jeremy Browne, who was acting as the City of London’s envoy on Brexit, said that Emmanuel Macron’s France was actively seeking to exploit Brexit to disrupt and degrade Britain’s lucrative financial sector.

In a leaked memorandum, he said his time in Paris had been “the worst”, with the French open about their desire to see the UK weakened.

Mr Browne, who met banking chiefs, senior politicians and diplomats, wrote: “They are crystal clear about their underlying objective: the weakening of Britain, the ongoing degradation of the City of London.

France’s ‘desire to use Brexit to weaken City of London’ exposed in leaked memo (Image: GETTY)

“The meeting with the French Central Bank was the worst I have had anywhere in the EU. They are in favour of the hardest Brexit. They want disruption.

“Every country, not unreasonably, is alive to the opportunities that Brexit provides, but the French go further, making a virtue of rejecting a partnership model with Britain and seemingly happy to see outcomes detrimental to the City of London even if Paris is not the beneficiary.”

Mr Browne – a Liberal Democrat minister in the coalition under David Cameron and Nick Clegg – said hostility to the UK was not confined to a few officials but represented a “whole-of -France collective endeavour”.

He added: “The clear messages emanating from Paris are not just the musings of a rogue senior official in the French government or central bank. France could not be clearer about their intentions. They see Britain and the City of London as adversaries, not partners.”

The memo was originally published in the Mail on Sunday.

Mr Browne’s comments are supported by the fact that France has been reportedly trying to dethrone London as the continent’s banker for almost a decade now.

In 2012, the former Governor of the Bank of France, Christian Noyer, said London should have been stripped of its status as Europe’s main financial hub and sidelined to allow the eurozone to “control” transactions within the bloc.

Mr Noyer told the Financial Times that there was “no rationale” for allowing the eurozone’s financial centre to be “offshore”.

“We’re not against some business being done in London, but the bulk of the business should be under our control. That’s the consequence of the choice by the UK to remain outside the euro area.”

Mr Noyer’s broadside was one of several outspoken public attacks that had been launched by French leaders on Britain.

After Standard and Poor’s stripped France of its AAA credit rating, Mr Noyer said Britain’s rating should have been cut before that of France as the UK had “as much debt, more inflation, less growth than us”.

According to a 2010 report by the Daily Telegraph, the main accusation appeared to be that the former French minister was more likely to side with then President Nicolas Sarkozy than he was with the leaders of London’s under-pressure finance sector.

As the publication put it, “the Frenchman was seen as a threat”.

The UK’s fears appear to have been justified, too.

That nervousness reportedly burst into the open, with David Cameron moaning about the City being “constantly under attack”.

For the former Prime Minister – and figures from the UK’s financial industry – the problem was not one single issue but rather a worrying trend.

Anthony Belchambers, chief executive of the London-based Futures and Options Association told the publication at the time: “Red tape, ill-informed tax initiatives, protectionist policies and high ‘pass on’ costs will damage the international reach of the City.”

Mr Barker also pointed out that the underlying alarm in London was a more visceral fear; that Mr Barnier and his backers had been using the regulatory system to sap London’s strength as Europe’s financial centre.

The EU correspondent wrote: “Already, rivals such as Paris and Frankfurt are on the march.

Mr Barnier always dismissed the complaints against him as “nonsense”.