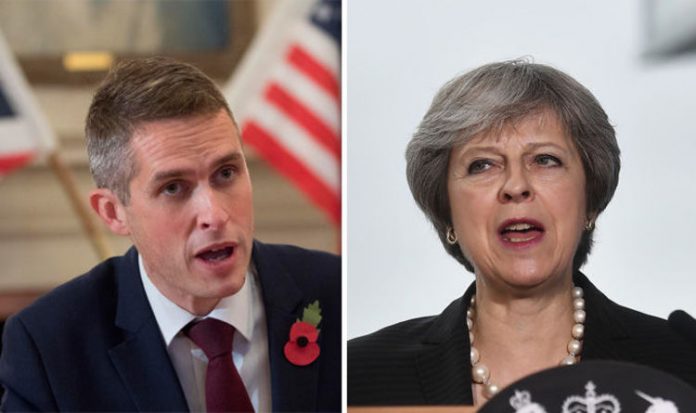 The pair have been at loggerheads over cuts to military spending, with Mrs May rejecting a campaign from Mr Williamson to increase funds despite facing a shortage of £20.5 billion. She insisted Britain has the biggest defence budget in Europe and second largest among NATO members.

In a leaked document to the Defence Secretary last month, US counterpart Jim Mattis warned that France could replace the UK as Washington’s closest military ally unless more money is pumped into Britain’s defence budget.

In June, during a joint press conference with NATO chief Jens Stoltenberg, Theresa May refused to explicitly say whether the UK would remain a tier-one power.

But Mr Williamson again defied Mrs May when addressing the Atlantic Council think tank in Washington, prior to holding talks with Mr Mattis.

Mr Williamson talked up the “UK-US special relationship” in what appeared to be a response to Mr Mattis’ earlier comments around the UK being replaced as Washington’s closest ally.

He said: “The United States has never had nor will have a more reliable ally than Great Britain. Others may pretend – but you will find no greater ally than us.”

The Defence Secretary also used his address to highlight the importance of NATO to the US as Donald Trump continues to berate and increase pressure on allies to contribute more to the costs of their collective defence.

The US President told leaders at the NATO summit last month that they should increase their defence spending to four percent of GDP – doubling the two percent target that is set to be met by eight member states. Britain contributes two percent of GDP to NATO.

Mr Williamson claimed the pressure put on NATO allies that they needed to spend more on defence is now paying off.

He said: “Alongside the US, the UK has been pressing for the alliance to do more, to pay its way. We are now seeing the results. Last year saw Nato’s biggest spending increase in 25 years.

“The time is now to look to the whole globe, see what other nations we can partner with and make sure that we build strong and new alliances.

“These are many nations that we have strong military links with and strong and deep connections with.

“We’re very confident because of our world leading position in combat air there are many nations that will want to work with us.